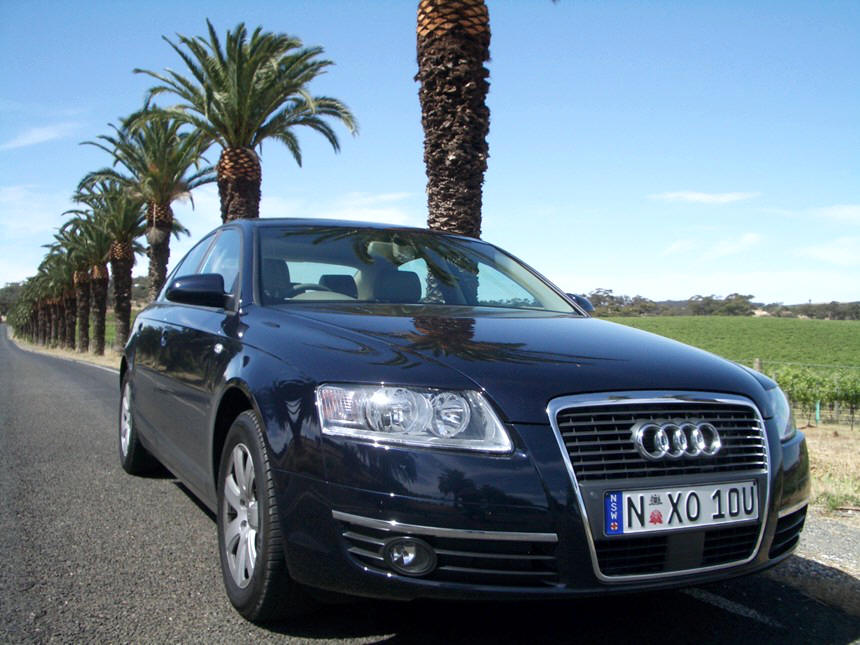 Audi’s large car, the A6 is the current model in a very long line of full-size sedans, dating back through the 100 series which originated in the late 1960s. There’s been a lot of changes through the years, but two fundamental elements have always remained.

The big Audis have always been technologically advanced cars and have been built to a very high standard of quality. Both of these are quite evident in the latest A6.

While this model isn’t brand new to the market, it has recently been updated – to include the new Audi corporate face, and new engine variants have been added. The new 2-litre version tested was an interesting machine. First thoughts are that 2-litres is nowhere near enough to pull a Commodore sized car. But the clever turbocharged engine certainly gives the car better performance than you’d first expect. The only down-side to this economical motor is the noise – when pushed it sounds like a wheezy little engine, not in keeping with a big luxurious European car.

Nonetheless, the entry level big Audi cruises very nicely in country roads, the CVT transmission is well suited to the engine, and there’s even reasonable overtaking acceleration available when loaded with four people.

It’s a well equipped car too, the highlight undoubtedly being the reversing camera which shows objects behind on the in-dash screen. It’s marked with moving guide lines and works with the proximity sensors. It takes some getting used to but is an excellent system. We drove three times Formula 1 World Champion Sir Jack Brabham in our test car and he was impressed by the reversing system. The seats are supportive and the driving position very adjustable. Owners will be sure to enjoy the high quality sound system.

At $75,900 it’s almost $20,000 less than the higher-spec 2.8 V6 version, and must be considered reasonable value. It’s probably not the model sporting drivers would look at – but there are V6 and V8 versions for that. Without the large diameter alloy wheels that larger engine versions have, this version lacks some of the visual impact they enjoy. Tight panel gaps and obvious attention to detail are hallmarks of this very beautifully built piece of German engineering.