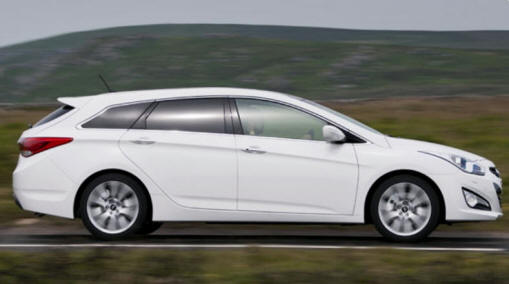 The i40 Tourer tackles a fresh sector of the market for Hyundai. I think the plethora of SUVs and 4WD wagons has depleted the market of traditional wagons, so I was pleased to see another wagon enter the market. Rather than just adding a wagon back to an existing model, Hyundai has chosen to initially make the i40 Tourer a stand-alone model. Of course it shares many components with other Hyundais, and that’s not a bad thing.

Stylistically it’s not bad at all. Sleek and modern looking the car received quite a few positive comments in the time I had it. A couple of lines aren’t quite right (the back edge of the rear side windows for example), but overall it has a classy appearance.

And this carries over to the car’s interior, which is highly stylised. I’m not enamoured by the form-before-function centre console though. Sure, it looks dramatic, but the layout of the switches seems to have been left to wherever space remained after the stylists had finished.

On the down side: I can’t understand why there is a musical production which plays on entering and leaving the car. For some reason somebody at Hyundai has overdone the chimes with a nine-note rendition from under the dashboard on entering and exiting the car.

In real criticisms, while the headlights have turning lights and a neat, curved row of LEDs in them, the high beam has very poor projection, bad enough to limit speed at night when travelling in the country.

How does it drive? Very nicely. It doesn’t have the feel of an Audi or a Volvo, but if you’re moving out of a Corolla that’s a few years old, you’ll be impressed. The ride and handling seem to be among Hyundai’s better recent efforts. The engine, in the diesel I drove, was willing, had a small sweet spot where the turbo was spinning just right and torque could be enjoyed - and the transmission was excellent. There were little paddles for gear changing, but they really don’t suit the characteristics of the car’s powertrain – and an i40 buyer doesn’t need to pretend he or she is Mark Webber.

There are three different trim levels, the highest of which, Premium is extremely well kitted out, but expensive at $46,490 (diesel). The mid-range Elite version I tested still had a good level of equipment and was a little lower priced at $41,490 – which nevertheless isn’t cheap. i40s start at $32,490, so obviously Hyundai is trying to market it as a premium car.

So where does it fit in the marketplace? Even it's place within the expansive Hyundai range can be a bit confusing. VW‘s updated Passat wagons range from $40,990 to $45,990 (the V6 is more). The attractive Mazda6 wagon starts at $35,950 and Volvo’s little V50 wagon sits in the mid to low $40s. Maybe Ford’s excellent but larger Mondeo wagon at $32-48K or even Peugeot’s new 508 Touring starting a smidge over $42K would be considerations. Whichever way, it will take a change in mind set about Hyundais for before some buyers even look at the i40. But it does deserve consideration.