This book has an appropriate title even before you get to the subtitle. What is unexpected about Porsches is how they are rocketing up in value. Even old beat-up dented rusty 356 open cars are over $100,000 now.

But the quality of this book shows why. Because the great minds of the car collecting world have turned their spotlights on Porsche, saying in effect “These are the cars to collect” and the search is on for old Porsches, the older the better (the Gmunds, made in Austria are the most sought after, worth a million each).

The “unexpected” part of the title also applies to the book which at first I dismissed after seeing the cover as just another picture book. But then I took a look inside and mama mia, this Fuhrman takes some serious pictures. I wouldn't doubt it took him a whole day to light one car. He makes Porsches truly beautiful and now collectors will be after them even more than they were before.

Also unexpected in the 416-page hardbound book from Coachbuilt Press is the content, going deep into the company's history and the history of individual cars.

I say the entertainment value is in not only the scrumptious pictures but in the many anecdotes about early Porsche days. There are stories in here that you have to be an “old timer” in the Porsche world to have heard before. It is an excellent book to instantly steep yourself in Porsche lore.

I have found, being a book author myself, collaborative books can sometimes end up with one person doing all the work and the other co-authors being mere dilettantes, but in this case you can see it was a rare happy melding of three authors each of whom brought something to the table. The authors are Randy Leffingwell, who has written many a book before, including several on Porsches, Cameron Ingram, head of a family that has made collecting Porsches their mission in life and the aforementioned Furman who has talent he same talent he used to shoot prewar classics and focused on Porsche making them truly cars you can appreciate for their aesthetic value alone.

INSIDE STORIES
Going back to the remark about inside knowledge, here's some of the “inside stories' told in Porsche Unexpected.
–The 904GTS. How Porsche thought to use fiberglass as an integral part of the chassis, and how that car was a success in its time, but this is the first time I read they had some chassis problems that led to a different approach in the 906.
--The Glaser Porsches. Another interesting tidbit is when Glaser, a European coachbuilder, helped Porsche make some convertibles in the Fifties but, sadly, the firm made the mistake of underbidding. Porsche insisted he deliver at the prices quoted and Glaser went bust.
--The Abarth Carreras. Porsche was fascinated how Carlo Abarth made such fast cars out of Fiats. They sent 20 (some say 21) 356Bs to Italy to be bodied. Then the intrigue starts, the cars farmed out to a small bodybuilder instead of Zagato.
–The Buzetta Speedster. So there's this GI over in Europe who calls Porsche to order a Speedster but is told that they have stopped making Speedsters. So he buys a coupe but at the last minute Porsche says they found an uncompleted Speedster out behind the coachbuilder's plant. So he has a Speedster made after they stopped making Speedsters, and it turns out to be a great collectable decades later. 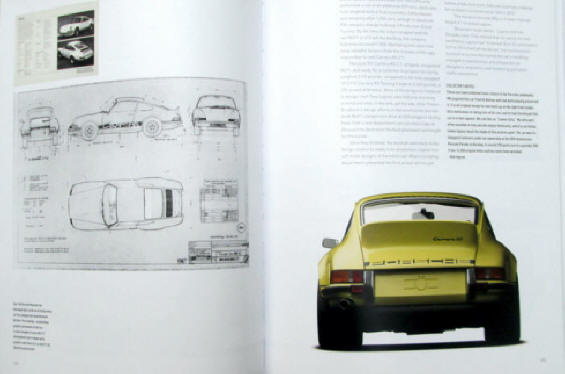 THE HEAVIES WEIGH IN
What I appreciated most about the book is the many quotes it has from the leaders in car collecting like Dr. Frederic Simeone and Peter Mullin, both museum owners, both interviewed in the book. At first I rebelled at quotes from them, thinking “they can buy anything they want” but then once I read their comments I realize the beginning collector can still learn from their comments. There is wisdom here, such as the line “You can never pay too much, you can just buy too early.”

These experts, such as museum owners Dr. Simeone and Peter Mullin have seen trends come and go – and thus it is very interesting to see how they view the car collector scene evolving as we speak.

Dr. Simeone for instance has emerged on the car collector scene as the leading proponent of not tearing down a car and restoring it from scratch but often leaving it in its “as found” state if there's something to learn from that (such as his Cobra Daytona coupe, only slightly better than when it was run hard at Bonneville decades ago).

One very interesting tidbit I never heard discussed by anyone anywhere is the prediction of the coming of the Chinese collector. There are a lot of wealthy mainland Chinese who are collecting fine art but haven't yet cottoned on to classic cars. Someone in the book asks something to the effect of “Can they ever lust after a Mercedes Gullwing if they were never aware it existed?”

The book predicts that they will eventually as they become educated in Western automobile history that took place when Communist China was cut off from the West culturally. All of which, incidentally, will push collector car prices up as new players come onto the scene.

THIS BOOK COULD AFFECT PORSCHE VALUES
It's just possible that the high quality of this book will have a measurable effect on the value of Porsches. Why? Because it turns a great big ol' spot light on the Porsche marque as if to say “Yoo-hoo, hey, all you future collectors, these are the next cars to buy.” After all, if the cars weren't worth it, they wouldn't have put in all the work, which is an obvious labour of love by all three co-authors.

I think when those who had no exposure to Porsche in the past read this book, they will realize how significant many Porsches are, and why many models, even old dusty dented ones, have quadrupled in price in recent years. It comes through very clearly that Porsche was a company always intent on delivering the ultimate roadable sports cars.

Not that the book is perfect. It reaches too far on having the 356, the 911, and even mention of the 924, 968 and 928. I would rather have had only 356 in the book or only 356 and 911 up to the last air cooled one. But as an overall read this book will, I predict, launch many a newcomer “into the game” of collecting Porsches just by virtue of the fact collectors like Mullin and Simeone recognize Porsche as a worthy marque to collect. (By the way, only one model of 924, a limited edition, received attention in the book, with no mention being made if the regular models are deemed collectible.)

I would say, of the package justifies the price, of $150 (available in Australia from The Pitstop Bookshop).

Now, it's true I met many of these people during the course of my own reporting, but this book answers questions I never thought to ask. For that I'm grateful and this book should be a keeper in your permanent library to periodically reinspire you. And I know my next collector car - the one with the most appreciation potential - has to be a Porsche, the earlier the better…

~~~
Wallace Wyss is a guest writer for CarOpinion and the author of Incredible Barn Finds (Enthusiast Books). The third in the series is was published in May, 2015.