There seems to be a renewed interest from manufacturers - luckily for buyers - in sporty cars. Hyundai has never really had a sporty model in their range (their old mid-size coupes may have been sporty looking but were not actually sporty to drive), so their first serious attempt is interesting.

It's an interesting car in several ways. Design-wise, it is interesting for its layout. On the driver's side it has one long door. On the passenger side, a shorter door with a rear door fitted in behind. Quirky, yes. More practical than a 2-door car, but not as hatchbacky as a 5-door. Probably quite a clever marketing idea. The styling is interesting too. A gaping grille at the front helps it look like some kind of fish you'd only find at the greatest depths of the Pacific Ocean. It's even bigger on the SR Turbo model. The sides are dominated by vast wheelarch flares. While at the back it's clear there was free crack for the styling team at Hyundai's studio. What a mess. You'd describe the car's styling as edgy, but not coherent.

There may be more headroom provided than some low-roof coupes, but your noggin has the sun beating down on it - and the roof-lining is at very close proximity to your forehead. My young son found the space in the back fine and thought the extra door with hidden doorhandle was a great novelty, as a kid might... 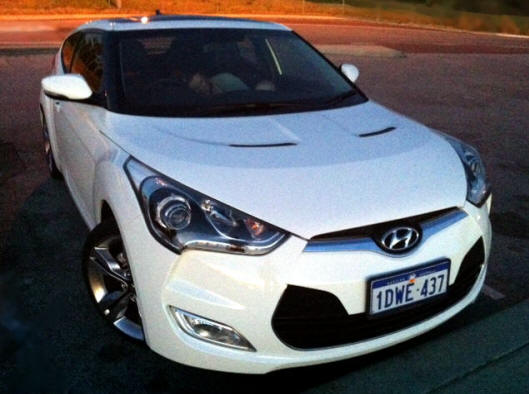 The interior is comfortable, without the sometimes intrusive seat side bolsters some sporty cars have. There's a lot of hard plastic in the construction, but it's commensurate with the car's price. The Turbo model tested had an excellent, logical and simple to use Sat Nav system with the 7-inch LCD touch-screen. And remember Hyundai is the first to offer free annual upgrades - an idea which everyone will have to copy. The headlights are excellent. The 6-speed gearbox, like all the controls, is light and easy to use.

The Veloster + version, for $2000 over the base model gains an electric driver's seat, leather/leatherette trim combo, a panoramic glass roof, upgraded instruments, push-button start (looks cool) and heated door mirrors. The neat glass sunroof with electric retracting internal sunshade works well, except at higher speeds when it gets quite noisy.

Two power plants are available. One for girls, one for boys. Sorry, but I'm sure that's how Hyundai's marketing people know it sells... The naturally aspirated Veloster is completely devoid of any performance. You can guess who that's for. Dramatic looks, inside and out, big alloy wheels, low slung aggressive styling - backed up for the traffic lights Grand Prix by.... absolutely nothing. It seems the girls don't mind, because they've been marching out the door at twice the rate Hyundai expected. Obviously it hits a certain nail on the head. This model, by the way, idles so amazingly quietly and smoothly you'd think it has start-stop technology (which it doesn't).

For the rest of the population, there's the SR Turbo. With 125kW under the fake-vented bonnet it makes for a much better all-round car. This one has the goods to back up its looks. Acceleration off the line isn't as strong as you might expect from a relatively light car with 200 horsepower, but mid-range it's really strong. It's commendably lag-free.

Maybe it was the tyre pressures on the test car, but at freeway speeds the steering felt quite woolly and slightly detached. Body-roll is very well controlled and high quality Sachs shockabsorbers have been specified for the Australian market cars.

The Turbo gets even more in your face styling with more exaggerated accoutrements either end. Stylish alloy wheels with chrome blades on the spokes look great. Special colours are offered on the Turbo, including a matt-grey finish that must be hand-washed only and 'Marmalade': a chameleon of flip-flop colour that changes hue when viewed from different angles, however it will only be available for a six-month period. Certainly the car gets plenty of looks from the public.

The Veloster is not going to woo anyone from the Toyota 86, but for those who are not looking for an out and out sports car, the Veloster makes an interesting alternative at an attractive price - and people seem to really like it. 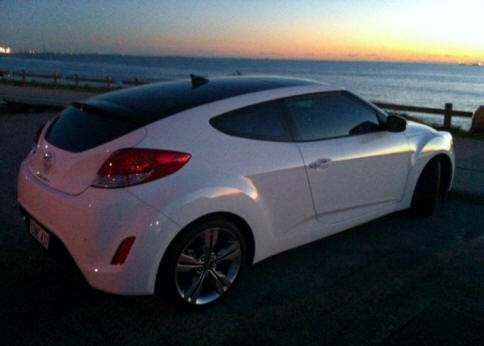 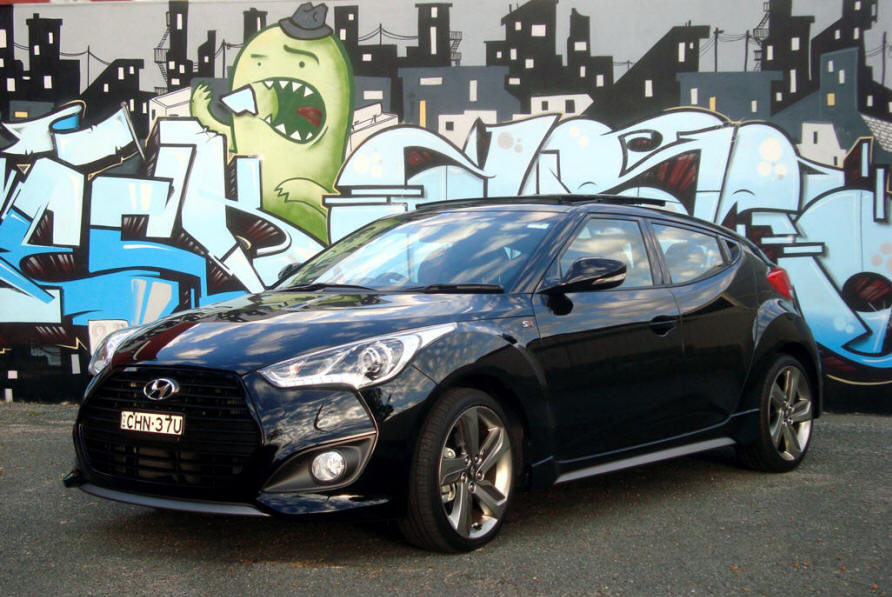 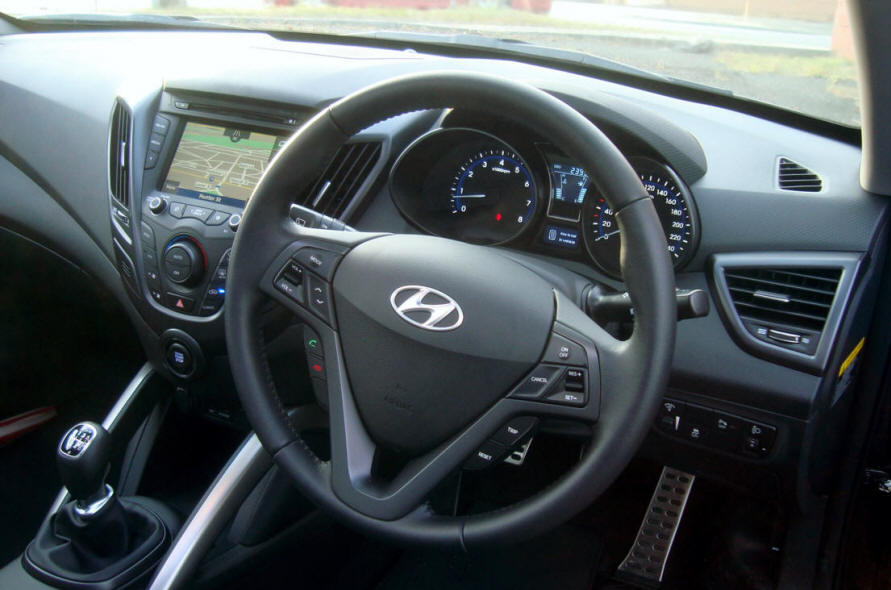 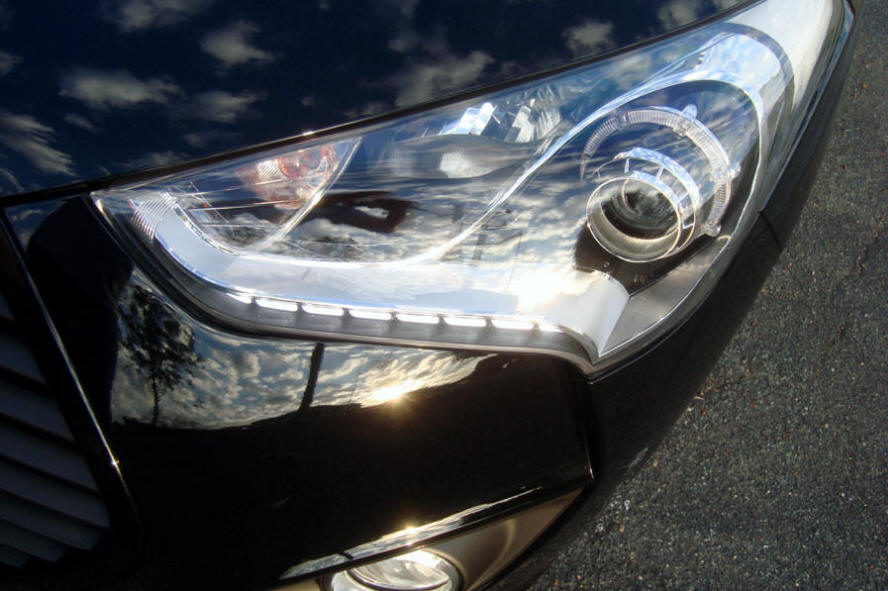 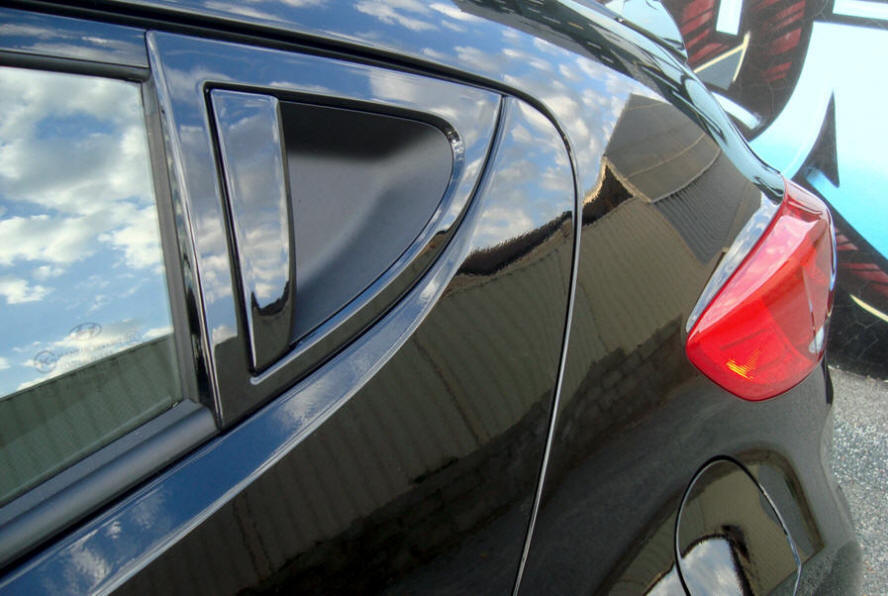 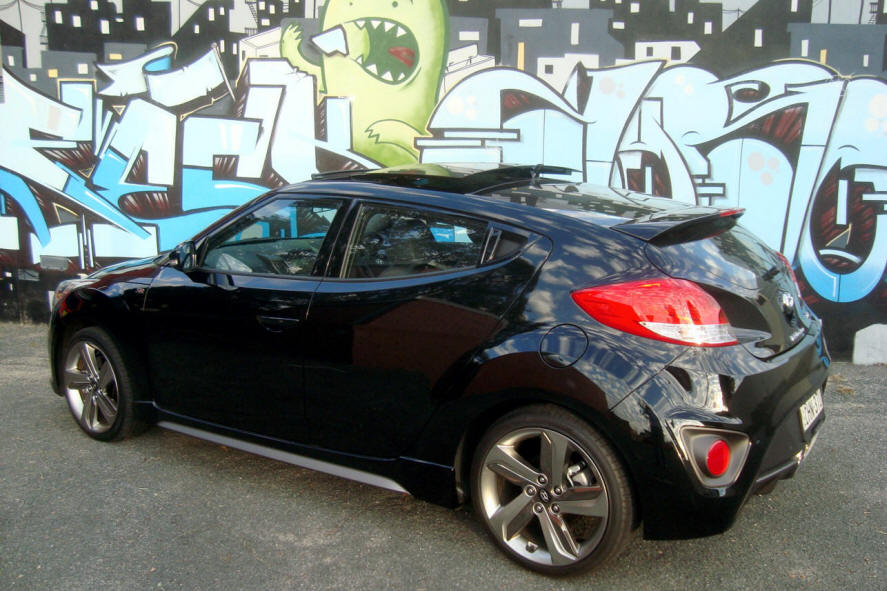