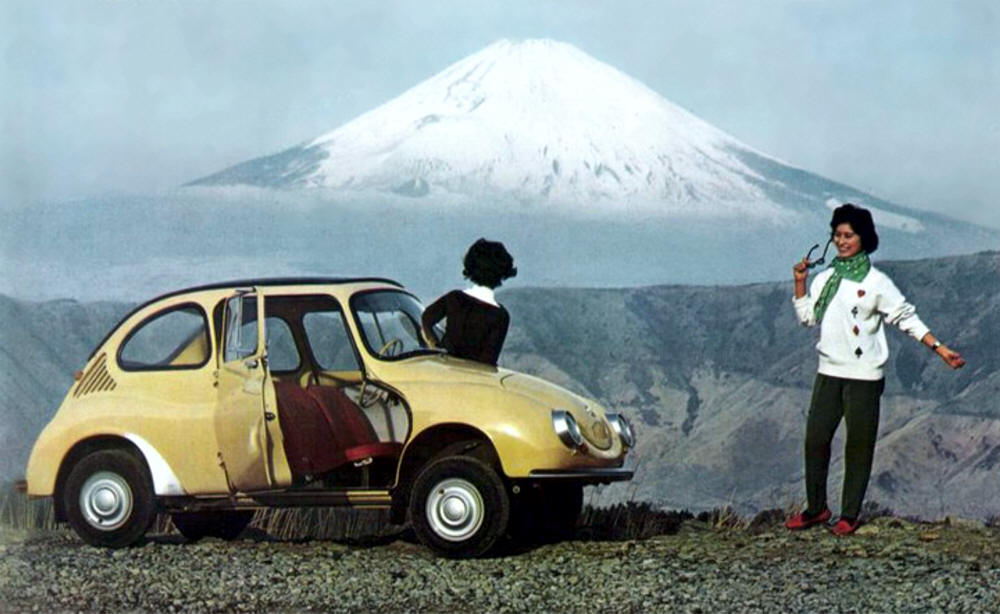 Many car companies have a proud history which they refer to in their publicity and even in retro production models, like the new Beetle, Mini, Fiat 500 and Thunderbird.

Subaru on the other hand, doesn't seem to make any reference to its early days… and it seems there may be a good reason why. Would you own up to this 'quaint' little bubblecar?

The Subaru 360 is not without merit, but it somehow lacks the cool image that a WRX owner wants to associate with. 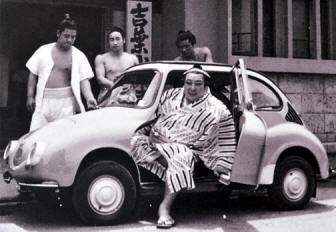 390,000 of these little critters were built, almost all being sold in Japan. The way they came about is an interesting tale. Fuji Heavy Industries was formed when six Japanese industrial companies joined forces in the early 1950s. One of their aims was to produce motor vehicles, in Japan's bourgeoning market. The popular Rabbit scooter, sort of like a clumpy looking Vespa, was one of the first successful products of the new company.

Japanese regulations allowed huge benefits for a class of microcars – the Kei class, which had a set of maximum dimensions, including engine size. Road tax was a fraction of that for a normal size car, and where owners of large cars were obliged to have their own off-street parking, Kei cars were exempted.

The Kei class still exists today in Japan, however the physical dimensions and engine size limits have all increased over the years.

The styling of the little Subaru, first seen in 1958, would best be described as cheerful. Unlike much else at the time, other than the baby Fiat 500 and 600, the extremely rounded shape at least meant that the Subaru would stand out from the crowd. Actually, it is quite cute, even by today's standards, and certainly gets its fair share of attention on any outing. 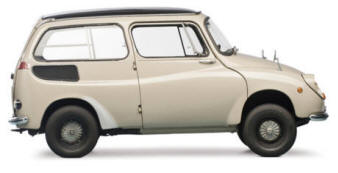 The Custom, was a wagon with more space but a very high boot floor due to the engine.

Subaru also developed van and tiny minibus versions based on the 360 platform and running gear.

The steel body was a monocoque construction and had either a fibreglass fixed roof panel (with Perspex rear window), or a roll-back canvas roof. The car weighed only 408kg, so if four adults squeezed in, plus a full tank, you could double the total weight.

The brochure naturally described the car in glowing terms, “The first time you see the Maia, you will be enthralled by its beautiful lines”. It went on to claim “you will be thrilled by its superb acceleration power, by the lightness of its controls and by its road-hugging stability at high speeds…”

There was rack and pinion steering, hydraulic brakes and the sting in the tail didn't actually have any venom to speak of. The two-cylinder, horizontally-opposed 356cc power plant in the back produced just 11.5kW, which was called 16hp in those days.

With a top speed of 100km/h (screaming) you'd at least be sure of enjoying the scenery along the way to your destination. American publication Consumer Report named the car “the most unsafe car on the market”, saying “it was a pleasure to squirm out of the Subaru, slam the door and walk away”. A Lincoln Continental it was not.

Road & Track, also from the US recommended against buying one “unless you have some highly restricted special use for such a car”. Australia's Wheels magazine tested one in 1961 and commented on the high quality of build and finish. “Maybe the Subaru does not develop enough power to go fast enough to oversteer” they said. Uh-huh.

One Japanese advertisement proclaimed “If you ride Subaru 360, you must not afraid about machine trouble”. Ah yes, they must mean the famous Subaru reliability.

Subaru responded to export pressure with a 423cc big block. Power was now 18kW. Well, of course that would have made all the difference. The factory quoted 0-80km/h in 23.8 seconds. They should have just kept quiet. 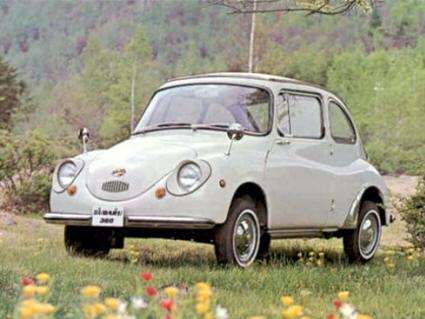 In Europe, the car might have actually been a success. Italy's Fiat 500 (virtually identical in size to the Suby) and France's Citroen 2CV also had two-cylinder, performance-free engines. But the biggest difference was in how they drove. While the two European cars were able to deliver some real driving pleasure, in spite of their low power and low price, the little Suby was not quite all there as a drivers' car.

I had the opportunity to drive one of the few examples in Australia. This car is a part of the Peter Briggs collection in Western Australia. Lasting impressions included how small the cockpit is, and I'm used to microcars. With two people on board it feels like you're in each other's laps. On this early car, sliding windows at least mean that the hollow doors give some elbow room. Inside, it is pretty basic fare - just a single instrument, the speedo with a couple of warning lights on a crude, hard plastic dashboard. The seating position must be a Yoga position. For advanced students.

Entry and exit requires care to avoid injury. The rear-hinged doors appear to allow good access, but the lower windscreen surround juts into the gap which your body and limbs have to fit through.

Like a lot of little motors, this one needs a lot of revs to keep on the boil. There's a complete absence of torque, so it's just as well the little 2-stroke doesn't mind revving. Once you get it up and running (remembering no synchro on first in this early 3-speed car) it scuttles along okay. Turn-in is rapid and the light steering is actually quite responsive. Most noticeably, the nose of the car continually bobs up and down softly, which at first is disconcerting when cornering, but once you grow to expect that unusual sensation, you get more confident in the car's cornering. The single, centrally-mounted front suspension spring (yep) is to blame.

The brakes seemed quite adequate on my test drive, but I wasn't going very fast at any point. 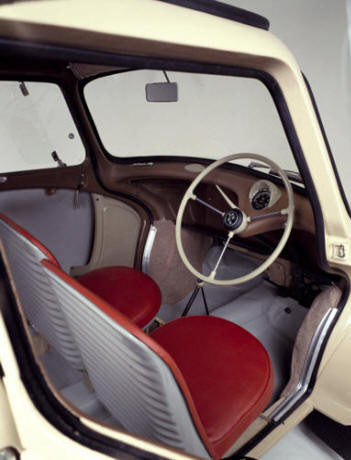 As you might expect, the 2-stroke engine makes quite a racket (especially because it always needs bulk revs) and its only aural pleasure is when you switch it off.

This littlest Suby certainly showed some of the unusual engineering solutions for which the company would become renowned. One of the oddest design aspects is the suspension layout, which is fundamentally by torsion bars, linked to a single, centrally-mounted vertical coil spring at each end of the car, mounted at the bulkheads.

Interestingly, these little buggers were actually imported into Australia and offered for sale. A Ballarat entrepreneur by the name of Frank O'Brien made a trip to Japan in the late 1950s, returning with one in his suitcase along with the sole rights to Subaru for Australia. Another seventy-two cars were to follow, including some of the little Custom wagon version.

O'Brien marketed the cars at a very low price, considerably less than a Fiat Bambino, but the Subaru just didn't hit the mark with Aussies who in the late 1950s and 60s were mainly interested in big Holdens. While O'Brien claimed “60 miles per hour and 60 miles per gallon”, fuel was cheap and besides, people didn't want to be laughed at. Plus, Japan wasn't exactly flavour of the month with memories of the last war being quite recent. Names like Toyota, Mitsubishi and Nissan wouldn't be well known here for several years.

All the Subaru 360s imported to Oz were pale blue, including the car I drove. The engine apparently showed durability problems when operating for long periods in high temperatures, and with no real dealer network this was hard to overcome.

By 1962 Frank O'Brien waved the white rag and the first chapter of Subaru in Australia was over, with plenty of cars still unsold. In Japan, the 360 soldiered on, believe it or not, until 1971.

Very occasionally one turns up for sale in Australia – usually for very little money as most examples are in poor condition. You'd have to spend considerably in excess of a finished car's value to restore one. Or just really love it. 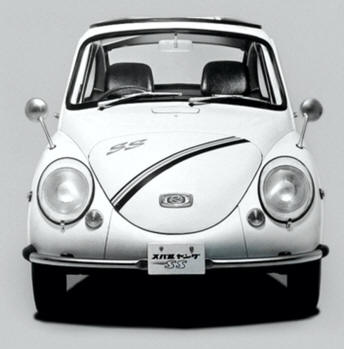 THE 360 YOUNG SS
Perhaps the most charming version was the Young SS – sort of what a WRX is to the Impreza range today.

Introduced in 1968, it was instantly identifiable by a diagonal stripes across the front. The Young SS featured an uprated twin-carb engine, giving an impressive forty percent more power (26kW), almost enough to claim it had some performance. Suspension was upgraded to include one shockabsorber for each wheel! Inside, rather than the single speedo of the standard car, there were twin instruments, each about the size of a 20 cent piece.

Externally, it featured Perspex headlight covers, up-spec wheel trims and air intake scoops (just like a WRX but at the other end of the car). There's one Young SS in Australia, and there's no doubting it's the real great-granddaddy of the WRX. 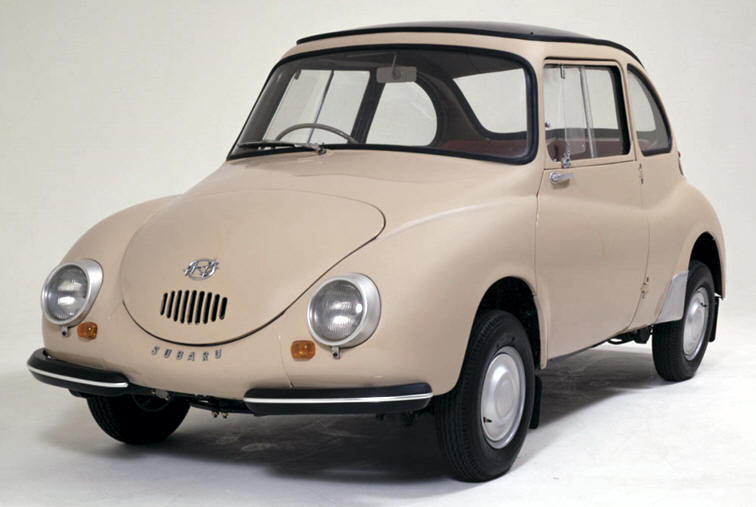