Transformation via a SWB

A Story by US motoring writer and artist Wallace Wyss

In the beginning, Bobbi just wanted to keep Forrester, her one and only husband, happy. 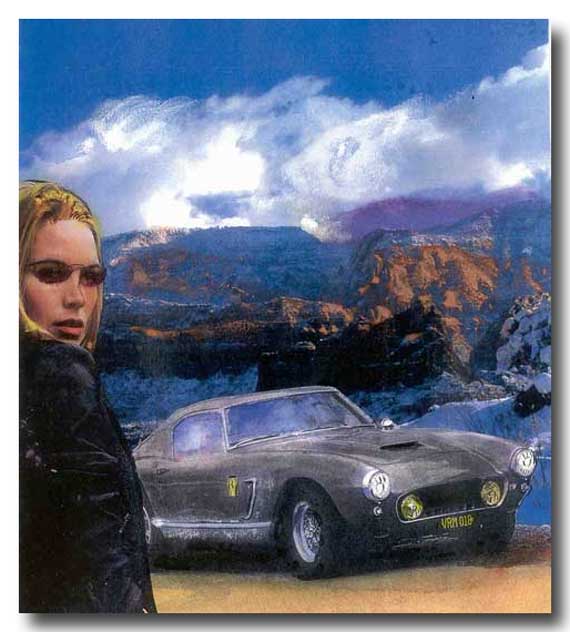 Forrester was an engineer, and even before they were married, Bobbi realized engineers were numbers types, not big on showing emotion. It was hard to tell when he was happy or sad. He was just Forrester. He had been her first boyfriend, a senior when she was a freshman, and she stuck by him and waited tables when he’d gone off to Georgia Tech to become a mechanical engineer. He promised to return, and so he did. After graduation he came back to Madison and married Bobbi.

Life was good but not exciting.

Forrester never mentioned anything about her looks, so Bobbi never knew if she was dressing right for him or not. But she had to admit that over the years she’d become frumpy, with a little, uh, how did the guys say it, “junk in the trunk.” Forrester didn’t seem to mind. Or notice. He was, after all, married to his work. A new job meant a move to Southern California.

Life was good but not a thrill.

And so it went for eighteen years, until one day circa 1983, when Bobbi was down in the den, dusting things off. She didn’t dare move anything in the den, as that was Forrester’s sanctum sanctorum. But she was allowed to dust.

That’s when she discovered the Ferrari stuff.

But the Ferrari stash was the surprise. Forrester always liked cars and went to a car show now and then, but Bobbi was never sure exactly what kind of cars he liked. He drove a Chevy for business and owned a beat-up International Harvester Scout that he used for hunting, but an International was about as far from a sports car as you can get. Bobbi dug through the chest of Ferrari books and articles and pictures, and it was clear that Forrester lusted after a Ferrari even more than he lusted after those college cheerleaders.

Bobbi Anderson, now on the dark side of 35, thought she might have been a trifle frumpy, with a bit added to the back porch, but she was no dummy when it came to investing. She had learned about a new company called Apple. At first she liked the name because it was the same as the Beatles recording company. She put most of her modest inheritance into the stocks right after they went public, though she never told Forrester about it for fear that he would not approve of her choices. However, Apple stock proved to be a very smart decision.

Bobbi had often dreamed of buying something for Forrester, something big he’d never forget. Her Apple shares would allow her to do just that. Since the accidental invasion into the sanctum sanctorum. now she knew what it would be. For their 20th wedding anniversary, she would buy Forrester his Ferrari.

Some time passed, Forrester got promoted and his employer sent him to Hong Kong, Ethiopia and other places Bobbi couldn’t even find on the map. She’d man the ship, saying, no sweat, Forrester Jr. is in college and she'd keep busy. She had no idea that Forrester would be gone as much as it turned out. In the meantime, she knew it was going to be easier now to secretly get that anniversary present.

Not knowing much about Ferraris, Bobbi joined the local chapter of the Ferrari club and had her membership card sent to the same PO box she had her investment info sent to. Forrester would never catch on.

At the first meeting, Bobbi felt out of it. There were only a couple of girls there among twenty or so middle aged men. They were so young and pretty, they just had to be “arm candy,”ť kind of what you expected to be on the arm of guys who drove $200,000 cars. Bobbi rarely if ever saw the wives.

But the younger girls accepted her. In fact, they needed a club secretary. Bobbi volunteered and did such a good job that they also put her in charge of the newsletter. After a few meetings, Bobbi found she wanted to be one of the girls.

By her fourth Ferrari club meeting, Bobbi started going to the gym to get rid of the junk in the trunk. “Frumpy” and “Ferrari”ť did not go together.

It didn’t take too long to get down to size 6, and her new friends from the club took her downtown to the expensive stores like Saks Fifth Avenue. Ferrari, so it seemed, went with names like Armani and Calvin Klein. Her friends said she could almost double for Bo Derek. The men in the club discovered that the once frumpy Bobbi was now just downright sexy with more than a hint of class. Forrester’s taste in clothes was, well, let’s just say Sears was just right for him. He really liked those wash-and-wear short sleeve shirts and pre-tied ties. She thought it best if Forrester did not see her in her new clothes. Not yet, anyway.

Bobbi had always heard the saying “good things come to those who wait.” She had to admit it was true because of what happened with the ad. As editor of the Ferrari club newsletter, it was her job to insert the classified ads for club members, and Ted Cummings, one of the old timers, wanted her to place an ad for his old Ferrari. He called it a “swb250GT.” She had no idea what “swb” meant but took down the information anyway.

The photo looked neat, just like one of the Ferraris Forrester had circled in the magazines in the den. She decided not to ask other members about it, as they might pounce on the discovery. Like her ventures into the stock market, Bobbi had learned to keep such information close. Cummings had wanted the ad in the next issue, but Bobbi went to the bank the very next day, got a certified cashier’s check for the appropriate amount and went out to Cumming’s house and bought the car right on the spot. Her garage was full of Forrester’s toys and her own car, so Bobbi rented a secure garage downtown for the Ferrari.

When she got home, she did some research on the car. Forrester’s books made it clear that “swb”ť meant “short wheelbase”ť and that “berlinetta:ť meant “little coupe”ť. This particular car had been Ted Cummings’ pride and joy for some 20 years. Cummings was an engineer like Forrester, and typical of the slide rule set, he didn’t care much about looks. 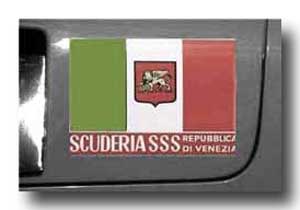 The car looked like it needed a paint job. It was a dull grey, almost like the primer on Bobbi’s old boyfriend’s Ford. On the trunk lid, Cummings had left a faded decal of the Italian flag with some sort of a coat of arms in the center. It was getting exciting, and maybe the Ferrari had been owned by a Italian count.

Most beginners in the Ferrari world thought Rosso Corso was the only way to go for a racing Ferrari, but Bobbi didn’t think Forrester was a Rosso Corso kind of guy. Maybe she should just keep the original paint job, and leave the decal for Forrester to figure out.

The club-recommended mechanic recognized the car right away because of its aluminum body. He said something about “SEFAC hot rod”, which Bobbi gathered was a good thing. The mechanic looked it up in some books just like Forrester’s and said it had probably been entered at Le Mans years ago. He also said “it was one of 18,” and to her 18 sounded like a pretty small number, which she hoped Forrester would appreciate.

The mechanic tuned it up and recommended that the car be returned to its original specifications with hotter cams like the “Comp 61″. She looked up the specs and figured well, would Forrester want them, and then decided yes.

A few days later, the mechanic came up with something he called SNAP extractors, which looked to her just like exhaust pipes with slits cut into the side, but if he thought they would improve it, well, why not?

The car was loud and when Bobbi drove it she always wore the wrap-around sunglasses. Bobbi was careful only to drive it at club events. Forrester would never know about the car until she would surprise him with it on their 20th anniversary.

In the year of their nineteenth anniversary, she had the car mechanically perfect, in fact better than new.

By now, every one of the guys in the club cursed himself for not knowing the car was for sale. Bobbi was careful to never divulge the details of the purchase, sure that there would be nasty rumours of what it had taken to swing the deal. Fortunately for her reputation, Ted had obligingly died soon after the purchase, so there was no one left to tell the tale.

That year Bobbi discovered the classic car tours and also enriched her life. She learned from others who could not enjoy these tours that they were trips for rich people, who cruised along in their fancy cars, stopping at gourmet restaurants and four-star hotels, blasting along the highways with contempt for the masses who looked on in astonishment as one exotic after another blasted by. But she found the tours exciting. There was the California Mille that she enjoyed so much, she signed up soon after for the Colorado Grand.

She was in Italy on yet another tour, having some Lambrusco out on the piazza with other club members, when she realized guiltily that it was her 20th wedding anniversary. Out on the piazza sat the berlinetta, with the racing roundel on it. Well, she thought, it was really Forrester’s car and damn it, he should be here to enjoy it, on the very same roads the car had driven in competition. But Forrester was in Brazil on another big project. He sent her faxes and called regularly, talked of playing golf or going fishing. She loyally answered back, but wondered where their life together, no longer all that good, had gone.

Back in the U.S., Bobbi had just ordered Forrester’s new vanity plate “MY SWB”ť when she got a call that Forrester;s blood pressure had suddenly and fatally caught up with him.

Brazil was a long way off, so she arranged with a company representative to have him cremated there. They Fed-Exed her the jar with his remains.

She called Forrester Jr., who was of course devastated. Or so she thought until she heard Cat Stephens in the background singing a song about a cat in the cradle. Junior was taking his finals and couldn’t make it home for the service. Bobbi felt a pang of guilt, she should have gone to Brazil, but there was nothing she could have done for Forrester anyway. And she had made reservations at the Del Monte Lodge for the Monterey weekend.

On her way to Monterey that weekend for the Historics, Bobbi brought the jar along. It was over the Laureles Grade that she deftly downshifted to second, swung the tail of the berlinetta out and drifted around a corner, meanwhile uncorking the jar between her legs. She lifted the jar and thrust its mouth out the window and Forrester flew over the pristine Monterey landscape, suffusing nicely with the early afternoon fog.

THE AUTHOR: Wallace Wyss is a California based fine artist of classic cars whose prints are sold through a company called Albaco.com