It’s not often that a major car maker branches out into a new category where other makers have dominated – and I’m not talking about the obscure niches which certain manufacturers seem to be forever creating.

In the medium to large pickup category the Japanese makers have owned the market for years - in particular Toyota, with their Hilux. Toyota's offering is the biggest selling vehicle in Australia, closely followed by Ford's similar Ranger.

And in the USA, pickups have long outsold passenger cars as best sellers year after year. 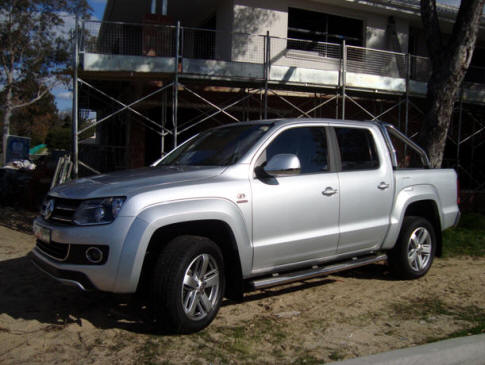 So the Amarok goes up against the Hilux, Nissan Navara, Mitsubishi’s Triton and Ford's Ranger. Pricing is competitive and equipment levels on the Volkswagen are slightly higher than the competition. And it seems to be working, with good market acceptance of the German pickup.

The Volkswagen I tested had the 2-litre twin-turbo diesel engine. That’s a litre smaller than the Toyota powerplant, but produces virtually the same power and almost twenty percent more torque – and that’s where the difference is counted. The towing capacity for the Amarok is class-leading. Advantage Volkswagen.

It’s a rattly-sounding diesel, not one of the company’s best from an aural standpoint, but it feels strong and provides decent economy. The two turbos work in sequence, ensuring that there are no peaks and troughs in performance.

A clever suspension design is part of the reason the Amarok provides a superior driving experience – almost car-like. The 6-speed gearbox has a decent feel to the gearchange and the steering gives the driver confidence that the Amarok is in touch with the road – something which is a little lacking in the competition…

It’s slightly larger all round than the Hilux, which probably works in the Amarok’s favour. Space inside the cabin benefits from almost 200mm extra width. The rear seats offer decent support and there’s sufficient space for five six-footers to sit comfortably. The rear seatback isn’t too vertical like some of the opposition. And it doesn’t suffer from the floor being too high compared to the seats, which blights the comfort of so many compromised designs.

Some of the hardware inside is familiar – such as the instrument cluster and climate controls – but sharing these with Volkswagen road cars is no bad thing. Overall fit and finish inside is up to Volkswagen’s usual high standard. I tested the Ultimate, fitted out with leather interior, big alloy wheels and a range of other goodies to set it more upmarket.

The opposition offers more commercial vehicle style products – where the finish and the drive are significantly inferior to the Amarok. I've also tested the Amarok with automatic transmission, an important option to see the model continue to succeed. Recently a V6 engine has been added to the range, expanding options for buyers and adding another good reason to consider the Amarok.

If ever a new contender was going to shake up a category, this is it – and deservedly so. No doubt the Amarok's acceptance has been an influencer on Mercedes-Benz for their new X-Series pickup. If you're thinking about a vehicle in this category, do your self a favour and test drive the Volkswagen rather than heading to your Toyota dealer in default setting.