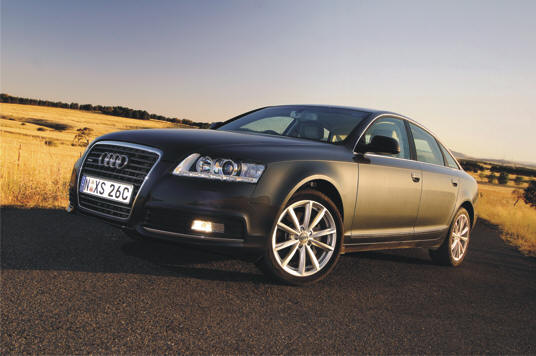 Audi’s full-size sedan is not new, but is most certainly ageing with grace. A subtle update to the A6 has given it a new lease of life. The styling at the back and front of the car have been brought up to date with Audi’s current look, and with little effort, the German designers have kept the A6 looking up to them minute. It’s pretty much what people perceive a large Audi to be – and that’s no bad thing.

It’s a beautifully styled car in a simple kind of way. The lines are very clean, there’s no radical angle to the side windows and no dramatically angled crease lines (which other German other makers are prone to currently). The windows are large, vision out is unimpeded and there’s a rare feeling of spaciousness front and rear in the cabin.

Nine versions are offered on the Australian marketplace now, ranging from a turbocharged 2-litre, 4-cylinder model to the high-performance RS6, in sedan or wagon configuration. We tested the V6 2.7 TDI turbo-diesel sedan, which features the middle of the three diesel units offered. The smallest is a 2-litre turbo 4-cylinder, the larger unit is a supercharged 3-litre V6. A range of petrol engines peaks with a spectacular twin-turbo V10.

Of course it’s torque, not power which is the important figure from a diesel engine. For those unaccustomed to driving modern diesel cars, you need to adapt to a driving style where you rely on the torque – of which there’s plenty in this Audi.

Performance is more than adequate, with the acceleration time for 0-100km/h being 7.9 seconds, which is comparable to the opposition. For those needing to go faster, the 3-litre A6 diesel runs up to 100km/h in just 6.8 seconds – and a RS6 takes a mere 4.5.

There’s little of the diesel clatter for which these engines were known in days gone by, and it’s just audible on start-up. Once you’re on the move you’d barely know it was a diesel. Around town the engine performs smoothly and the transmission seamlessly, the only criticism being that the ride sometimes seems a little hard.

On the highway and in the country the A6 comes into its own. The engine purrs and offers plenty of overtaking performance. The car strides along beautifully with excellent isolation from road noise and wind noise.

Inside the A6 the styling theme of clean simplicity continues. While the look is still luxurious, it doesn’t rely on being overdone, which leads to a serene and comfortable feeling inside the car. The finish is exemplary – nobody this side of Bentley makes a higher quality interior than Audi, and you just can’t fault this car.

It feels spacious and comfortable front and rear and the level of equipment leaves little anyone could wish for. The options list does include items such as power assisted door closing ($1400) and TV ($2672), but standard, it’s a pretty well equipped car and includes leather upholstery, Sat Nav, adaptive cruise control, sensor operated wipers and lights, electromechanical handbrake, automatic dimming mirrors and parking sensors.

The standard audio system boasts ten speakers and the optional BOSE Surround Sound System is thoroughly impressive. It processes and compensates for any extraneous ambient noises.

The system for operating the many functions (navigation, audio, climate, settings, etc) is relatively straightforward and logical, with the interface between the console-mounted controller and screen quite good. In a time when you need to study a course to operate some cars (some Lexus models have almost 1000 pages of instruction books), the instrument panel is uncomplicated yet offers all the information a driver might want.

It’s an easy car to just jump in and drive, without any hidden tricks to be learned. And at any time on the road the car keeps its composure, even when you’re pushing hard, as a proper luxury car should do. It’s comfortably enjoyable to drive, without being exciting – that’s left to the high performance models in the A6 range.

Probably the greatest feature of this car is the supreme quality of its build and finish. The A6 boasts a quality beyond most of its higher priced competition. There is precious little to criticise about the A6. Even the pricing is very attractive compared to its opposition. Today Audi isn’t an ‘alternative’ choice from mainstream luxury makes, but probably the sensible choice.