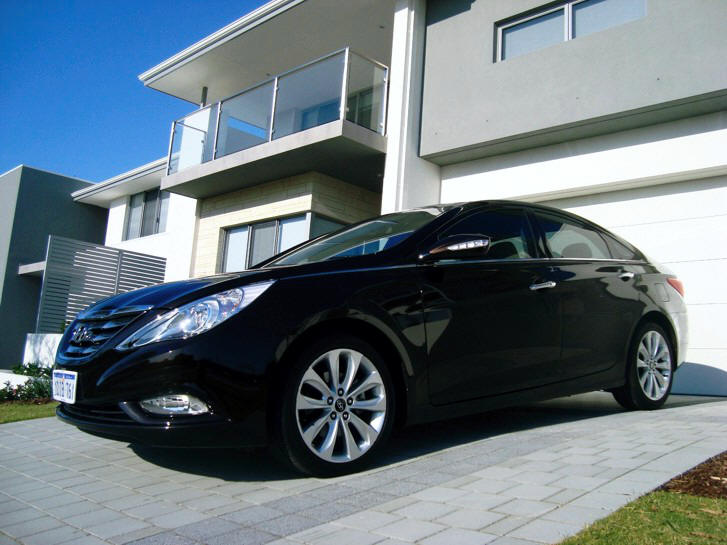 Hyundai boasts being the world's fifth largest, fastest growing and most profitable car company. Replacing the competent but completely unmemorable Sonata, Hyundai has made a brave move to reposition their new i45 as a segment leader by being a far more luxurious and modern model. We drove the new i45 at its launch around Brisbane and came away impressed.

Tackling the popular category dominated by Camry and Accord is a challenge. Buyers are generally conservative, but Hyundai has taken the view that moving forward, they need to move the game on, and not produce porridge like some of their competitors do... Mazda has taken the lead with its modern 6 and Hyundai should take comfort in the Mazda's huge success.

Whet gets your attention first is the sleek, modern styling. It's well proportioned and has some beautiful detailing, making it the most attractive among its competitors to this writer's eyes. Styled at Hyundai's facility in Irvine, California, the chief stylist Andre Hudson (pictured) was on hand at the launch and spent some time with this writer describing the process. Hyundai's international design centres submitted proposals and the American concept was selected. Only a year and a half in gestation allowed a fresh design to come to market quickly. The drag co-efficient CD of 0.28 is impressive.

All versions are very well equipped - the automatic transmission is a new 6-speed unit - which performed faultlessly on test, with smooth and quick changes. The start up models boast smartkey, a full suite of 6 airbags, leather trim, electric seat adjustment, 17-inch alloy wheels, flourescent instrumentation, rain-sensing wipers and plenty more on the spec sheet. Hyundai's aim is to give it the highest specification of any mid-size, mid-priced sedan on the market.

To drive, the car impresses primarily in two areas. First, is the impression even on testing roads that the car is very solidly manufactured. The fit and finish are extremely good, and there's nothing that rattles or looks like a poor finish. The second area is the overall impression of comfort - it's quiet, with some road roar on very coarse surfaces, and the engine noise is well supressed too. The front seats are exceptional, which you haven't always been able to say about Hyundais...

It's not a sporty car, but then the buyers attracted to this part of the market obviously aren't after a sporty car. Engine power and torque (top of the class among its competitors) are certainly adequate, but when overtaking on country roads it gets a bit breathless. Handling is nice and flat but the steering is a little dull - not that most buyers would notice, or even care. The i45 is an easy car to use, all the controls are straightforward and there doesn't appear to be any surprises or operating challenges. I doubt though, that people will utilise the key holder hidden away in the armrest box - just too hard to get to. I suppose most people will leave the key in their pocket or dump it on the console.

The suspension is significantly different for the Australian market, where the company expects to sell 4000 units by the end of the year. In the US and Korea where the car is already available, it's been a major success - so we should expect the same here. 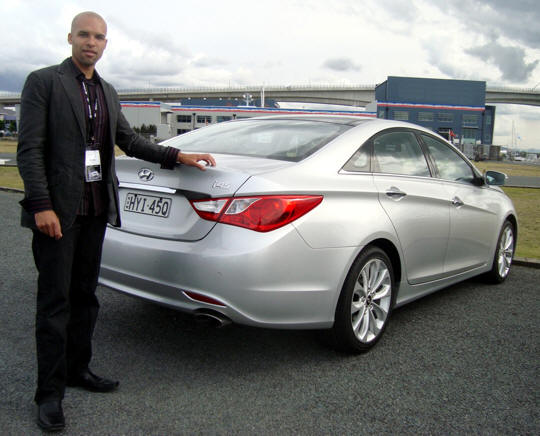 Above: i45 chief designer Andre Hudson at the car's Australian launch