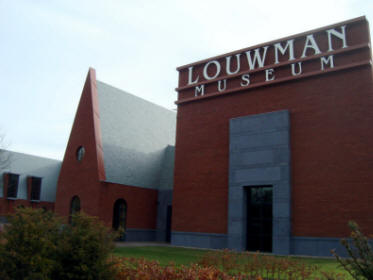 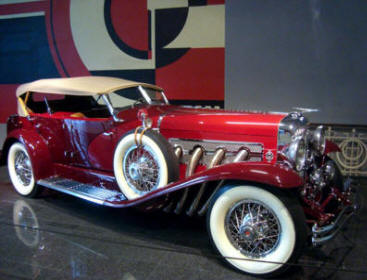 Set into a niche in a lush forest in The Hague, Holland is an astonishing car collection. Opened at the end of July 2010, the Louwman Museum houses what is claimed to be the oldest private car collection in the world. In the view of CarOpinion, it's the best car museum in the world.

The Louwman family has been successful in the car business for decades, and in 1934 when the family business was a Dodge dealer, old man Louwman bought an old car as a curiosity – a 1914 Dodge Tourer – well before the collectors car movement gained popularity. This car brought about the start of an incredible, diverse and highly valuable collection that today, rivals any in the world.

The collection boasts 250 vehicles today, and the new, purpose-built museum facility in The Hague shows them off. Clearly many millions of Euros have been spent on the building and its facilities – far outweighed by the value of the items it houses…

On wandering through the many exhibit areas it becomes clear that the Louwman family has been seriously collecting for a very long time, hunting down significant vehicles – and apparently with an unlimited money pot to delve into.

Perhaps their considerable shareholding in auction house Bonhams has helped them find some of the rarities that the collection boasts. As you look through the collection each room strikes you as more impressive than the last. Not only are the cars amazing, but the sets surrounding them and the other material captures your interest and makes time disappear. 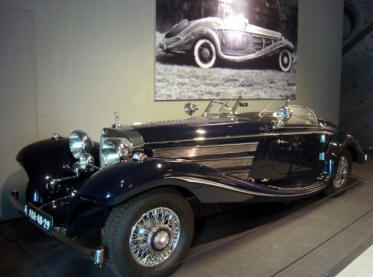 In most car museums around the world there are several spectacular or genuinely fascinating cars that really capture one’s attention, surrounded by lots of other cars, most of which are just old cars… At the Louwman Museum even the most hardened car museum visitor will go from room to room being completely amazed by virtually every car. There’s very little repetition and almost nothing without a remarkable story. And you don’t see rows of cars angle-parked, just a few at a time, carefully and cleverly laid out.

Even someone with just passing interest in cars would be engulfed by the creative sets, incredible histories of many of the cars as well as the stunning diversity of vehicles.

There’s a bleakness about the building, both inside and out - which was designed by American architect Michael Graves - but it’s outweighed by the sheer quality of the exhibits and the thoroughly impressive supporting material. For example, one of the amazing cars is the Brooke Swan Car – a car which famously was created by an eccentric Englishman who lived in Calcutta. More on the car later… The area around it, and a nearby Maharajah’s Rolls-Royce with polished aluminium bodywork are decorated with detailed Indian frescoes, furniture, paintings and a colour scheme which so perfectly creates the feel of 1920s India. 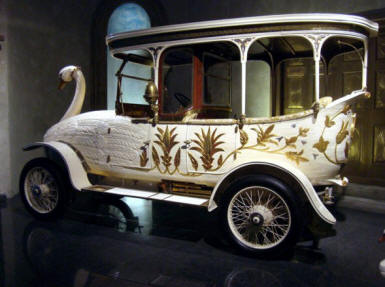 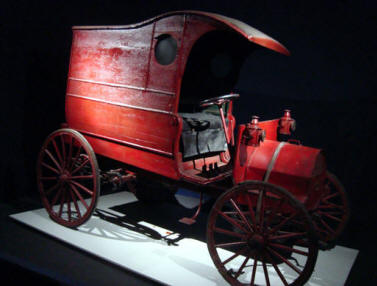 The three storey museum is laid out in such a way as there are not too many cars to absorb in each section, and the interesting shape of the building as a visitor progresses through keeps interest high. Time disappeared when my wife and I went through – as we approached the end, we were feeling hungry, thinking it was lunch time, but it was already after 4pm.

To begin with are the cars from the dawn of motoring. Here visitors first see something which is one of the dominating features throughout the collection – original, unrestored cars, properly preserved. A car in unrestored, never tampered-with condition tells so much more of a story than a shiny, rebuilt rendition ever can – and something untouched from the late 1800s is even more remarkable. And there’s plenty of them. 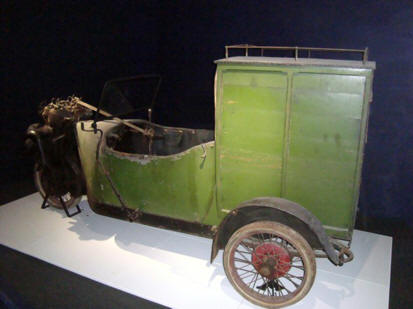 Remarkably this theme is very strong throughout the collection, whether it’s from 1894 or an untouched 1965 Ferrari 275 GTB which the Louwmans bought from its original owner.

The series of 120-year-old cars are in carefully-lit, humidity-controlled, glass-fronted displays and offer a unique insight into the beginning of motoring. This array of unusual machines is quite spectacular itself.

With such a huge collection, there are far too many highly significant cars to mention them all here, so I’ll describe some of the highlights which grabbed my attention.

One, perhaps oddly, is a Toyota. Not just any Toyota - and there’s a connection as the Louwmans have long been the Toyota franchise holder in The Netherlands… From 1936 to 1943 the large, American-inspired Toyota AA sedan was the foundation of the company’s passenger car offerings. None of Toyota’s first passenger car model were known to remain, and Toyota themselves commissioned a replica some years ago for their own collection.

In 2008, the resourceful Louwmans discovered a unique remaining example, in – of all places – Vladivostok, Russia. It had been owned by a Siberian farmer since World War 2, and had been used on the land, receiving several modifications, and becoming quite worn over the decades. The Louwmans managed to purchase the car from the original owner’s grandson. 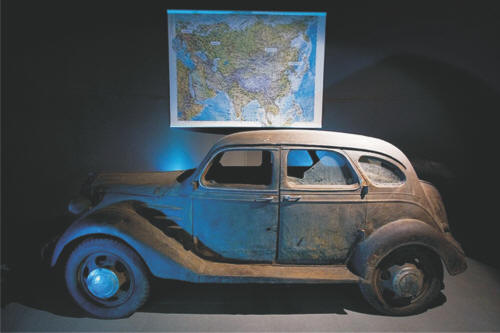 Permission was granted by the Russian Ministry of Culture for its export and the AA was taken to Moscow and then shipped to the Netherlands.

Though largely complete the car is in original but very rough condition, but will remain in its original state. Not only is it the oldest Toyota in existence, but the only pre-war example of the marque known to survive.

The Brooke Swan Car I mentioned earlier became famous when it hit the roads, its owner aiming to shock the elite in British-controlled India – which no doubt he achieved. Special features (aside from the amazing body shape) included light bulbs in the eyes, an exhaust driven horn which could play music, operated by a keyboard in the back of the car and the ability to dump whitewash onto the road from the back of the car to ensure everyone thought the swan was as lifelike a possible. 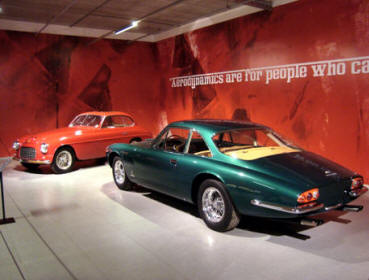 One of the most beautiful cars is a glamorous 1965 Ferrari Superfast which was owned by HRH Prince Bernhard of the Netherlands, who was one of Enzo Ferrari’s favourite and most loyal customers. The special order car was painted in a unique colour and had several different external fittings and a different engine to the other 36 Superfasts built.

Possibly the most striking show car at the 1953 Turin motor show was Michelotti’s Demon Rouge – a striking one-off mchine based on the exotic Fiat 8V, with a 2-litre, 105bhp V8. The ‘red devil’ incorporated many radical styling features and was certainly a major attention grabber in the early 1950s. This spectacular little car has recently won concours awards for the Louwmans. It’s displayed in an area of one-off concept cars. 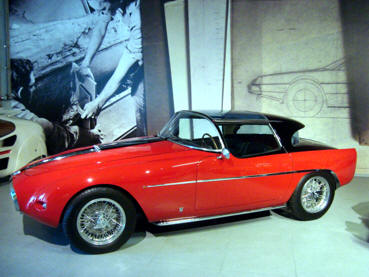 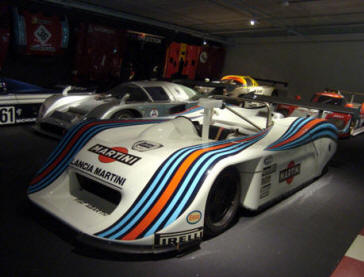 Famous cars from the movies are included in the collection – most notably one of the James Bond Aston Martin DB5 publicity cars and also the American taxi used in The Godfather.

There’s a Humber limousine of Winston Churchill and a ghastly modified Cadillac which was one of Elvis Presley’s last cars plus Kaiser Wilhelm’s Mercedes-Benz among the vehicles belonging to celebrities.

They have the eighteenth Ford ever produced (in 1903), a coachbuilt 1976 Fiat Shellette beach car kept on a private yacht harboured in Monaco, Steve McQueen’s Baja Buggy and an Amphicar.

The glamorous 1930s French ‘teardrop’ styled cars are represented of course, with some truly beautiful examples displayed. And for those who fancy Americana of that era, a pair of magnificent big Duesenberg SJs sit among the Auburn-Duesenberg-Cord section.

Racing cars are covered, in particular, by an excellent array of Le Mans cars and Sports cars, plus a great variety of Mille Miglia competitors. There’s the 1957 Le Mans winning D-Type Jaguar, McLaren Can Am, Lagonda V12 Le Mans, Aston Martin DB3S, the 1953 Ferrari Indy race car and so much more. The Le Mans Jaguar is remarkable, in that following its win, the car eventually became two cars, each with parts from the original car, both purporting to be the same D-Type. The Louwmans bought both and reunited all the correct parts to make it one again. A very expensive exercise, but returning some important automotive history to being correct. 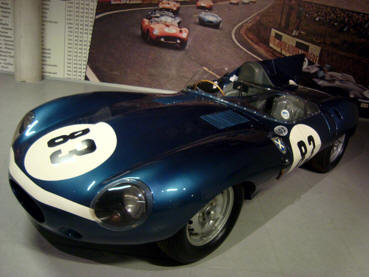 Commercial vehicles are covered well too – those that stick in the mind are a beautifully presented early London double-decker bus, an amazing unrestored 3-wheel Phanomobil delivery van from 1912 and some vast, beautifully detailed fire appliances which leave onlookers lost for words.

There’s a section covering microcars, with the ‘usual suspects’ such as a Messerschmitt and Isetta, plus some real rarities including a French made Rovin sports (which Louwman’s had the agency for) and a Inter Cabin Scooter 3-wheeler with folding-in front wheels - as if the 1-person width car was too wide… but it can fit through a doiorway. Nearby is a display of everyday cars of the 1950s and 1960s – with pristine examples including Anglia, Corolla, Renault 4CV and NSU Prinz.

A never-driven 1986 Chinese Shanghai SH760 car was bought new by the Louwmans still wears the protective plastic on the seats and shows how poorly built cars from the old Chinese Communist era were. The panel shapes are wobbly, the chrome trim is patchy and there is rust developing in some corners, in a car kept under cover and never driven. As with everything in the museum, it is a rare delight to be able to see an example of a Shanghai at all – they were never exported. 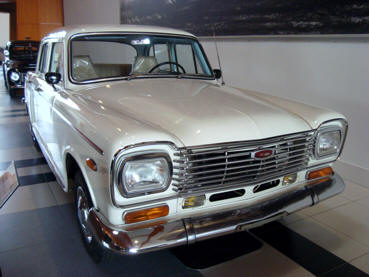 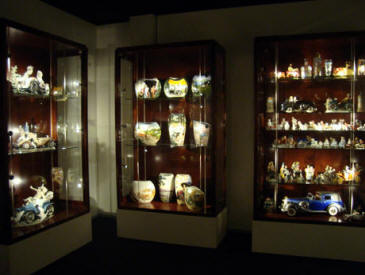 There’s also the world’s largest automotive art collection with a vast amount of floor area acting as an art gallery. Paintings and drawings by famous artists such as Gordon Crosby and Dexter Brown are complimented by original posters from early motoring, sculptures and a mind-numbingly large array of other collectible automobilia. Over 3000 automotive artworks have been collected.

It’s clear that the Louwman family have been bitten by the collecting bug pretty seriously… and no more obviously than when you’ve finally finished looking through the cars, art and automobilia and you walk into what you expect to be the cafeteria.

Well, expect to be amazed even more. You walk past the most comprehensively fitted out old workshop (every museum has one, but nothing as good as this) and onto full-scale replica town square – three storeys high. There are fully equipped shop fronts showing how they would have been a century ago, and there’s even a full scale gondola from an airship above which you can look into. Like everything at this amazing new museum, it is staggeringly impressive. 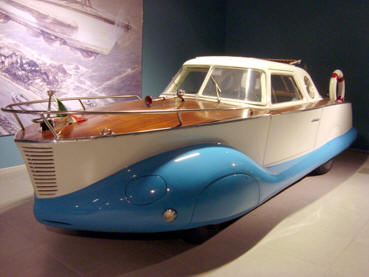 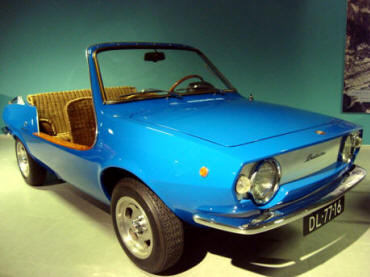 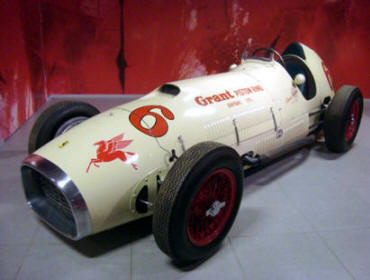 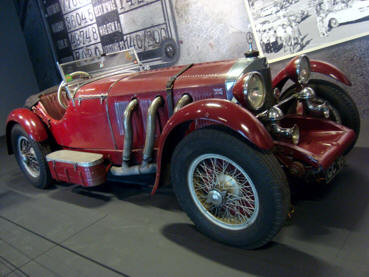 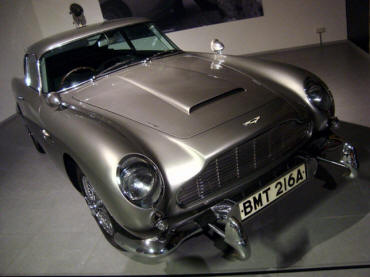