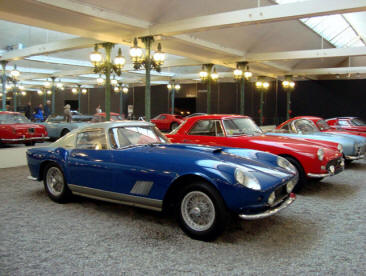 Here’s the story of an incredible car collection with an amazing history, which became The French National “Musee de l’Automobile”.

Brothers Hans Schlumpf and Fritz Schlumpf were Swiss citizens born in Italy, but after their mother Jeanne was widowed, she moved the family to her home town of Mulhouse in Alsace, France. Mulhouse was one of the world's leading centres for production of lace and other textile products.

In 1935 the Schlumpf brothers founded a company which produced spun products. By 1940, at the time of the Nazi invasion of France, 34 year old Fritz was the chairman of a spinning mill in Malmerspach. After World War 2, the two brothers devoted their time to growing their business, and became very rich as a result. Fritz loved cars, driven apparently by an abiding passion for automotive engineering. Having long wanted a Bugatti, he bought a Bugatti Type 35B just before the invasion of France. Bugattis were built in Molsheim very close to Mulhouse.

Fritz Schlumpf had a good reputation, having been generous to his workers, providing employee trips, installing an employee theatre and driving expectant mothers to the hospital in his car. This was in great contrast to brother Hans, a former banker, who paid the mill workers poorly, docked pay if they were late or signed out early, and did not pay bonuses. The brothers were enormously successful in business, buying many other mills in the region.

With the post-war economy improvements, people wanted to upgrade their old pre-war cars for new models, and sales boomed. Fritz and Hans began collecting in earnest in the early 1950s, only buying the most desirable models.

In the 1950s, remember, there was barely an old car movement, and even exotic cars 30 or 40 years old were just considered old junk. Unlike today! An old Ferrari or Aston Martin is worth big money today – not like in the 1950s.

Assisted by a Mr. Raffaelli, a Renault dealer from Marseilles and the owner of several Bugattis, the Schlumpf brothers started to build a Bugatti collection. They clearly got excited about buying high quality old cars. During the summer of 1960, they acquired ten Bugattis, including two rare Type 57s. In addition, the pair found three Rolls-Royces, two Hispano Suizas and a Tatra. By the end of the summer, they had a total of 40 cars.

The primary focus of the Schlumpf brothers was Bugatti. Fritz sent a letter to all Bugatti owners on the club register, offering to buy their cars. In 1962 alone he bought nearly 50 Bugattis! In the spring of 1963, he acquired 18 of company founder Ettore Bugatti's personal cars, including the Bugatti Royale Coupé Napoléon. 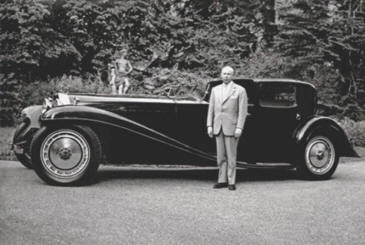 In 1963 US collector John Shakespeare offered his collection of 30 Bugattis (then the largest collection in the United States). After almost two years of negotiating, Schlumpf bought all 30 cars for $85,000. Among them was another Royale – the model which would become among the most sought-after and valuable cars in the world.

By 1967 an inventory showed 105 Bugattis in the collection - all under a blanket of secrecy.

Over the years nearly 400 items were acquired, and from 1964 as the woollen industry declined, a wing of a former Mulhouse spinning mill the brothers had bought, was chosen to group, restore and house the collection.

A team of up to 40 mechanics, carpenters and upholsterers and other specialists were assembled to carry out the restoration work - all of whom worked under a strict confidentiality agreement kept their work and the collection a secret.

Some people, including members of Bugatti clubs around the world, had worked out there must be a significant collection - although the eventual scale of the enterprise became a surprise to everyone.

Fritz visited the workshop daily, choosing the details and type of restoration each car would receive. The workers tore down the mill's interior walls and laid red tile walkways with loose stone floors for the finished cars to rest on. When the old streetlights of Paris were upgraded, the brothers bought vast quantities of them, to fit in their private museum.

The brothers Schlumpf always remained very secretive about their car collection, only rarely showing it to a few favoured guests and visitors - all sworn to secrecy about the collection.

In light of the slump in the woollen industry, by 1976 the Schlumpf brothers had begun to sell their factories. There are stories that the brothers went bankrupt. Or possibly one or some of their businesses did.

In October 1976 the brothers’ original Malmerspach plant laid off employees, and a strike broke out, with 400 police called in to hold back 2000 workers from ransacking the Mulhouse plant. After a stand-off, on March 7, 1977, textile union activists staged a sit-in strike at the Schlumpf offices, and broke into the Mulhouse "factory" to find the astounding collection of cars all beautifully displayed. There were restaurants, signs on the cars, everything as if it was ready to open to the public.

As an act to gain attention, an unrestored Buick was burned publicly - and a workers' union representative told the media "There are 600 more where this one came from.”

The night before, apparently on advice of the Police, the Schlumpf brothers had fled to Switzerland (in their Mercedes 450SEL 6.9) - and spent the rest of their days as residents of Basel. Their factory was occupied for the next two years by the heavily Communist textile union and renamed "Workers’ Factory." With the cars having gained worldwide attention, the union opened the museum to the public, with some 800,000 visitors in two years – all of whom had to sit through a lecture from the union. Entry was free, but a ‘donation’ was expected on leaving.

As the scale of the brothers Schlumpf debt rose, various creditors including the unions eyed the valuable car collection as a way to recover their losses. To save the destruction, break-up or export of the collection, in 1978 the contents were classified as a French historic monument by the government, meaning that no part could leave French territory. 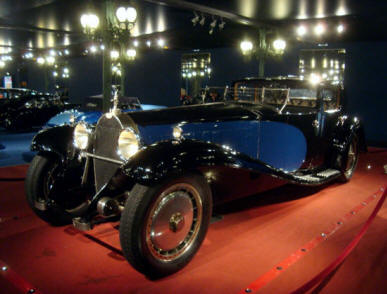 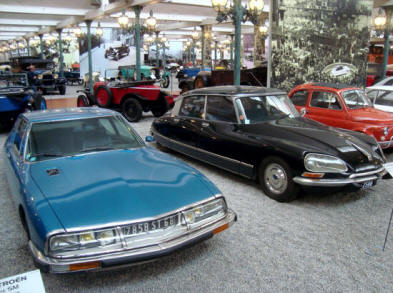 In 1981 the collection, buildings and land were sold to the National Automobile Museum Association, a state sanctioned conglomerate that includes: the City of Mulhouse, the Regional Board of the Alsace Region, the organizers of the Paris Salon motor show and the Automobile Club de France. The group placed daily management of the museum in the hands of an operating company, the National Automobile Museum of Mulhouse Management Association, which opened the museum to the public in 1982. However, lacking the enthusiasm of the Schlumpfs, the museum gradually fell into decline.

In 1981, Fritz Schlumpf filed a lawsuit from Switzerland claiming he was entitled to a portion of the proceeds of the sale – even though it was sold for a fraction of its market value. He died in 1992, but in 1999 a French court found in his favour, and directed that the Government pay a 40-million franc indemnity to Schlumpf's widow Arlette. The court also instructed return of the ownership of the so-called "Malmerspach collection". This consisted of 62 cars, mostly unrestored, which had been held all these years at Malmerspach including 17 Bugattis. 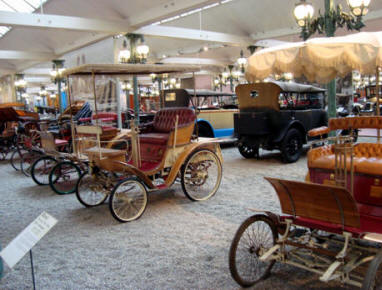 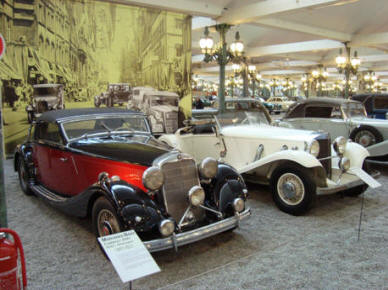 Having moved the cars to storage, Madame Schlumpf drew up an agreement with two businessmen, which meant that she sold the cars to them, but that they would remain in the storage shed until after her death. After she died in 2008, the cars were sold to the Peter Mullin collection in the US, and several of the cars are now on display in his very impressive new Art Deco museum in California, remaining unrestored. 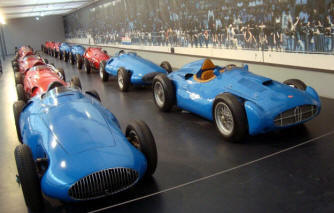 In 1999 the conglomerate of owners contracted ‘Culturespaces’ to take over and modernise the museum and its operations. Culturespaces renovated the museum from top to bottom, including creating large scale public spaces for other cultural events, while conserving the well-known main hall with its Parisian lamp posts. Widening the relevance of the museum to a younger audience, the museum reopened in March 2000 claiming to be the largest car museum in the world.

In July 2006, Culturespaces opened new areas designed by Studio Milou Architecture. These include the entrance to the Museum – a new forecourt, footbridge, atrium, projection wall and hands-on displays plus three new exhibition spaces at the end of the tour.

30 or 40 cars have been added in recent years, mostly popular cars. Periodically the French government lends cars – such as the Presidentielle Citroen SM.

Appropriately, Bugatti - the modern company which is part of the Volkswagen empire, also has a display.

Many other interesting displays, such as an extensive pedal car display have been added.

There are restaurant and café facilities on site as well as a shop selling a big range of automobilia - all much smarter than the Schumpf brothers ever would have imagined. 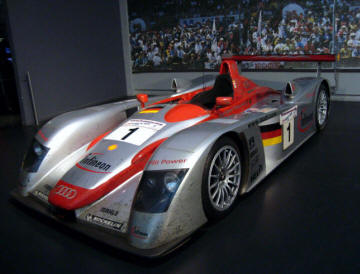 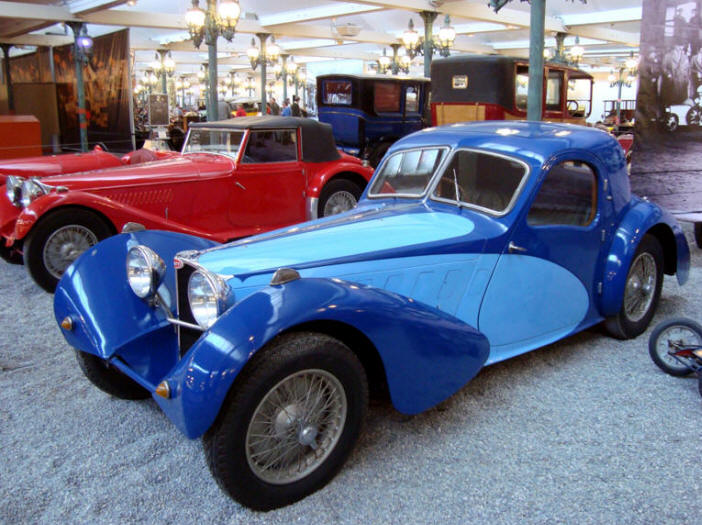 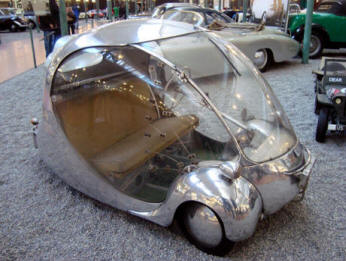