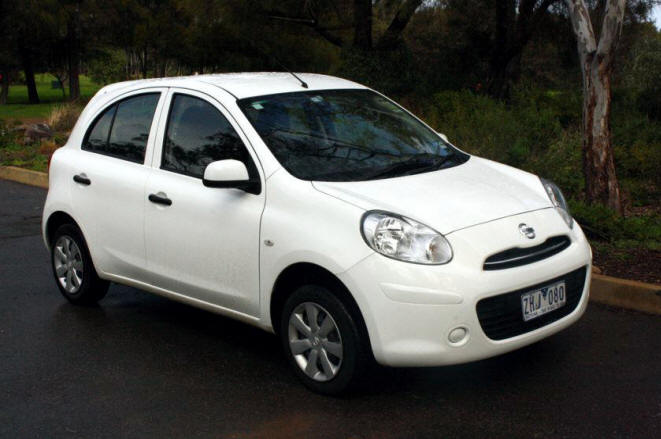 There's fierce competition these days in the tiddlers class and interestingly, several makers have gone the 3-cylinder way for powerplants. While Smarts have always had a triple nestled in behind their back bumper, and Daihatsu Charades sported 3 pots years back, there hasn't been much else offered until recently. Volkswagen's excellent, fun little Up features a 1-litre unit, Mitsubishi's new Mirage has a 1.2-litre engine as does the Micra. Larger capacity 1.5-litre 4-cylinder models were offered, but from early 2013 only the 3-cylinder engine is available. Three trim levels are offered.

The Nissan's motor is a thrumming, willing little unit, much like its competitors. Mated to a 5-speed manual transmission, which has well chosen gear ratios, it hums along nicely without any risk of providing any performance to speak of. A 4-speed automatic transmission is offered for an additional $2000.

Handling and roadholding are remarkably good - better that I expected. There's little body roll even when you push the car a bit and the suspension absorbs bumps and rough roads at least as well as bigger cars, like Corollas... And that's a big compliment as it's hard to get a really lightweight car to have a comfortable ride. They've done a very commendable job here and it's probably what most makes the Micra passably good to drive.

The interior design is quite good, considering this is a car built to a tight budget. It doesn't have some of the screaming cost cutting features which blight the Mirage's interior. Equipment levels are certainly acceptable for the Micra's place in the market. plus there are some little Surprise & Delight features such as a handbag hiding space built into the passenger seat base and some clever computer options.

Stylistically it's not a brave as its long-running predecessor was, but that will probably give the Micra broader market acceptance. It's a cute enough shape for the intended buyers... 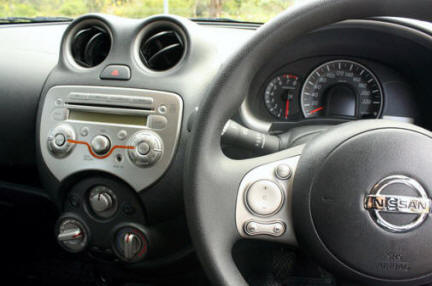 It is a very tinny, plasticky, lightweight piece of construction though. The door clang shut, there's bare paint on the boot ledge (which will get scratched and look scruffy quickly), and even the windscreen feels thin in the rain... The curved ribbing in the roof panel (to give strength and avoid booming) gives you an idea of the lightweight construction.

You don't pay much for a Micra but you do get value for money.

Like the Suzuki Alto, a close competitor to the Micra, Nissan Australia sources the Micra in India.

Once an industry leading figure, Nissan's 3-year, 100,000km warranty doesn't seem favourable compared to what Mitsubishi or Hyundai offer on their equivalent cars.

Is it a better car than it's prime opponent the Mirage? Probably. It rides and handles better and the interior is a nicer environment, and that's enough to tip the balance in the Nissan's favour. Importantly, the Mirage and Micra are both available in shades of metallic pink.