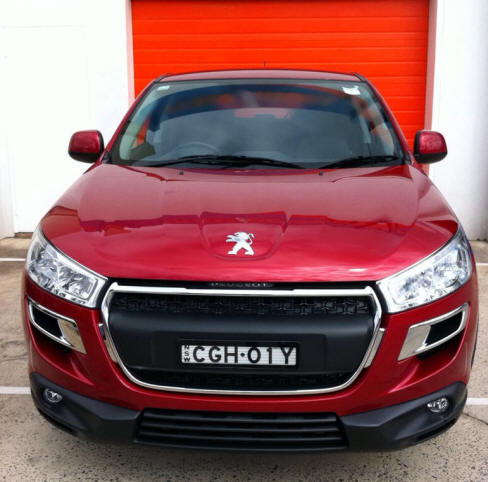 Here's Peugeot's most cynical-ever model. That said, it's a decent car.

While more and more car makers are sharing parts and whole cars with each-other - and it's nothing new - the Peugeot Group has been strengthening it's alignment with Mitsubishi. Peugeot and Citroen have been parts of the same company for decades, and both of the French makes are offering models manufactured entirely by Mitsubishi in Japan. The little Mitsubishi MiEV electric car can be bought in Europe as a Peugeot or Citroen. For Australia, we have two models. First we saw the Peugeot 4007 which is Mitsubishi's very competent Outlander, styled to look more Peugeot-ey and featuring the French company's excellent turbodiesel engine.

Now the 4008 has been launched, based on the smaller Mitsubishi ASX. In this case, it's just the styling at either end and the badges which are different. It must be said though, that the 4008 looks far smarter and more upmarket than the dour-looking ASX. Both (and the Citroen version) share the Outlander floorpan (heavily Lancer-based itself) which means they're all decent little SUVs. Each has a variety of standard fitments which helps place them slightly differently in the marketplace. Or maybe it will just confuse everyone.

Peugeot offers the 4008 in Active or more luxurious Allure versions. I drove both and they drive as well as eachother. The Automatic transmission in the Allure seemed to suite the car better - though some people find CVT transmissions seem odd with their constant revs as speeds rise. The Allure is only available in auto with all-wheel-drive, whereas 2WD and 4WD manual or auto can be chosen in the Active.

For an additional $3500 you can option up the Allure with 18-inch alloy wheels and leather trim - both very nice but like in any other car, won't make a zack of difference to your resale price. For comparison, the Citroen C4 Aircross is a couple of grand more, but comes with CVT auto and 18-inch wheels standard. The Mitsubishi ASX is cheaper than both - but doesn't have quite the spec or the cache of the French versions.

Probably the most annoying element, which many small SUVs suffer from, is the very small boot space. At least there's a full-size spare wheel robbing you of a lot of space in the 4008 though. And I suppose if you need boot space, you'll get a bigger car. Space inefficiency seems to be the hallmark of Japanese SUVs.

The cabin is nicely fitted out and well finished. Unlike the 4007, the indicator stalk is not changed over to the other side like on European cars. There's a standard fitment rear view camera - with a small screen in the rear view mirror or if you opt for Sat Nav, on the 7-inch screen. The perforated leather trim is very nice and adds a much more luxurious feel than the cloth trim options.

The 4008 drives pretty much like an ASX. No surprise there. That makes it among the better vehicles in its class. The 2-litre petrol engine is willing enough, but nothing remarkable. Now if they offered it with the brilliant Peugeot turbodiesel engine that the 4007 boasts, even at a higher price, it would be a real winner.