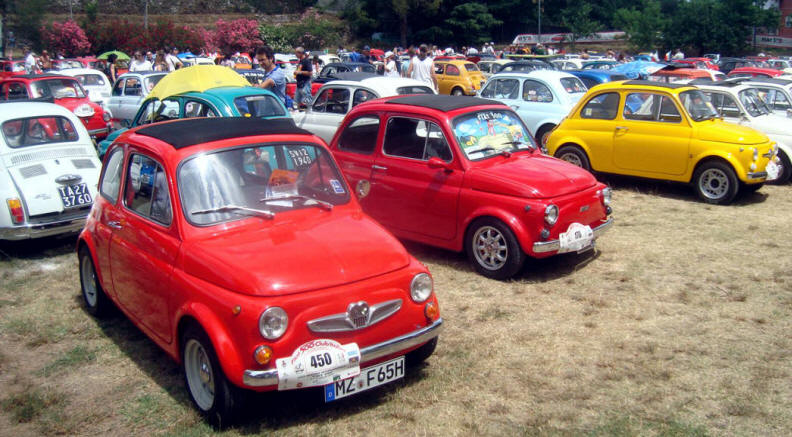 There are few cars with a strong a following as the original Fiat 500. The Fiat 500 Club Italia boasts almost 25,000 members, making it the largest single-model car club in the world. With 480,000 still on the road in Italy, plus many thousands elsewhere in the world, spare parts demand remains high, and prices remain relatively affordable - making the 500 a very low cost classic to run.

The 500 was first launched in 1957, as a very basic car designed to take people from scooters to a 4-wheel car. It looked quite similar to the larger, 4-cylinder 600, but the little 2-cylinder air-cooled 500 was aimed at a much lower price point. It was an immediate success, and after twenty years in production (by which time it was very old fashioned), 3½ million had been made.

The earliest cars were very basic, with no back seat, no wind-down windows and an anaemic 13bhp engine. It didn't take long for Fiat to offer a more powerful engine and better fittings, but it was always completely performance-free, ensuring good economy.

Companies like Abarth and Giannini made their fortunes making hot-up bits for 500s, which still sell in remarkable volumes to this day.

The little vertical-twin 2-cylinder engines were: 479cc up to 1960, 499cc to 1965 and then 594cc to the end of production in 1977. In 1960 the opening roof changed to be just the front section – on earlier cars the whole roof and back window rolled open. Major changes in 1965, with the second engine upgrade included a change to front hinged doors.

The Giardiniera wagon version was launched in 1960, and in fact outlived the 'sedan' 500 by two years. An extended wheelbase and longer rear overhang saw a growth in length of 21cm, all of which was useful. The rear door was side-hinged. A different version of the engine was made for this model (and its panel van derivative), with the motor effectively turned on its side under the boot floor. From 1968 to 1977 these were assembled by Autobianchi.

To drive, the 500 is somewhat less charming than it looks… There's no synchromesh on first gear, so double de-clutching is a necessary skill. The engines vibrate, through the whole car if the engine mounts are shot. The driving position is compromised, but in a way which was quite acceptable in 1957 – or 1967 for that matter. Rear seat space is limited, as you might expect. Even in the Giardiniera, a six-footer only fits if the large sunroof is open! 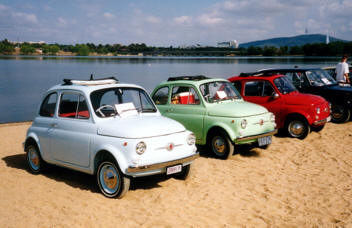 However, they are a lot of fun – manoeuvrable and pretty forgiving. And their looks make up for a lot of foibles. Pull the little handle behind the handbrake to activate the starter motor (the choke is a matching handle alongside), and the starter churns over until the engine catches and putt-putt-putt-brrrm, you'll get life from the unique-sounding little motor in the back.

Problem areas? Firstly, there's rust. Predominantly you need to check the floor of any 500 – the sunroof helping dampness set in… And the nose panel often rusts out, partly because it's a rust trap, but also when old leaky batteries drain their acid down into the bottom of the panel.

Inside, the 500 is pretty hard wearing, but upholstery doesn't live up to the rigours of Australia's harsh climate especially well.

The engines are long lasting, but are prone to vibrating ancillary parts off them. Exhausts come loose for example. Engine mounts should be in good condition or replaced. These engines are pretty straightforward and if well maintained should last a long time.

Some drivers, especially those unfamiliar with or unsympathetic to old cars will wear through clutches prematurely. But they're not expensive parts. Nothing is.

Conversions using later Fiat 126 (sold as the FSM Niki in Australia) engines and gearboxes are common and unless you're after a concours car, make good sense. Bigger capacity with more power and a more usable gearbox make for a much more usable car. 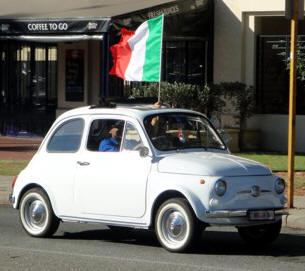 One of the great benefits of Fiat 500 ownership is the extremely low cost of parts. With strong worldwide demand for parts of a low-priced car, lots of manufacturers making parts and accessories, most parts are ridiculously cheap.

And there is strong club support throughout Australia and worldwide.

Prices? Early cars (suicide doors, full roll-back roof) are the most valuable. For a half reasonable car of any age, expect to start at over $15,000 – but for an exceptionally good car, double that amount. Show cars - even more. Later cars are less expensive and more plentiful. There's a vast range of conditions of 500s in Australia, but a word of warning; don't get taken-in by a high priced car unless it's in extremely good condition. Giardinieras are worth around 25% more than an equivalent 2-door car.

Genuine Abarth 500s are extremely rare anywhere and it's possible to recreate one from readily available parts. If a car has a proven history as a genuine Abarth 500, the sky's the limit on price.

The 500 puts a smile on everyone's face. And for good reason. 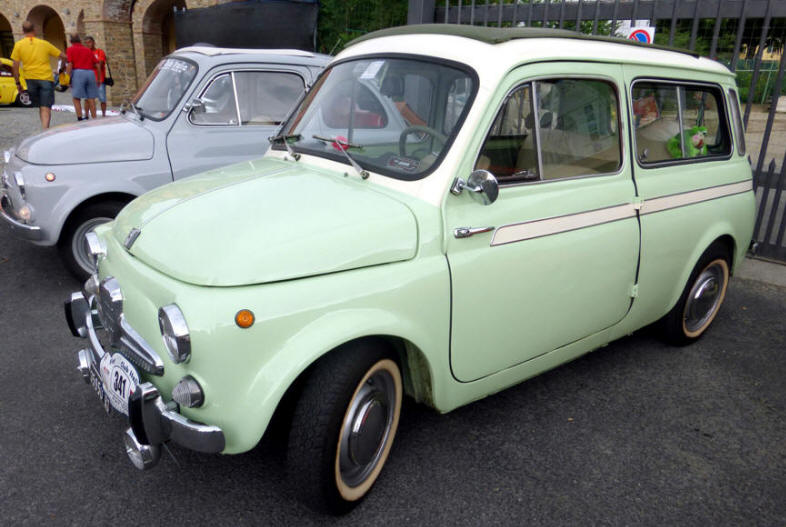 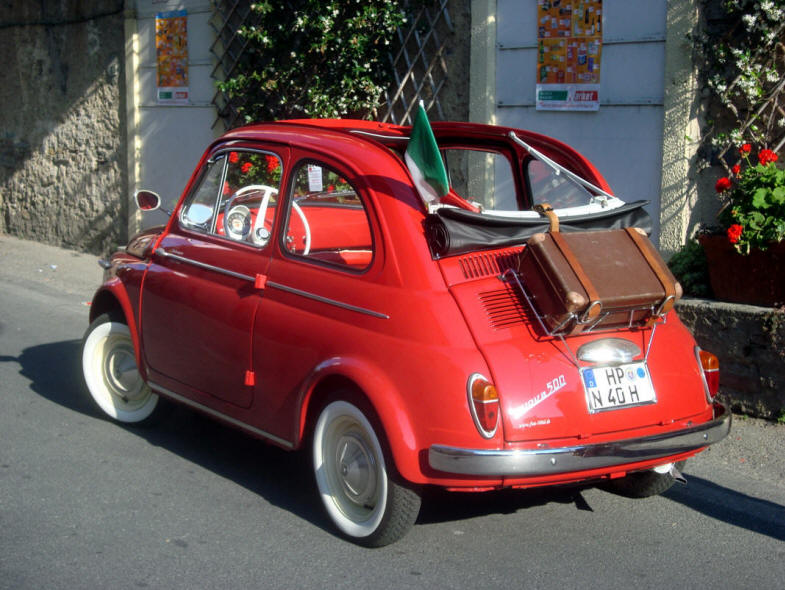 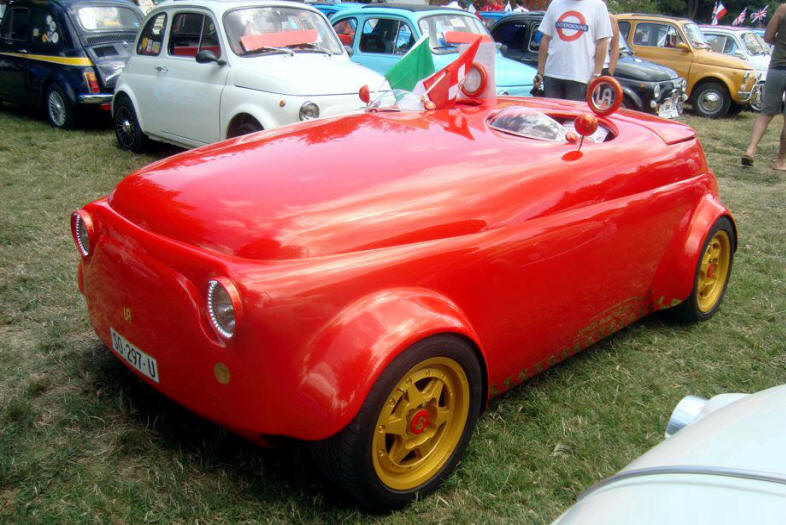 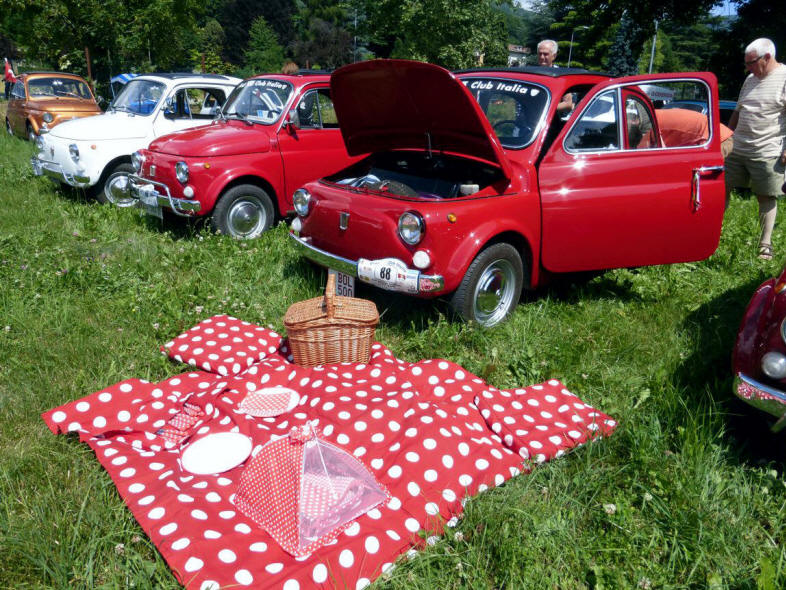