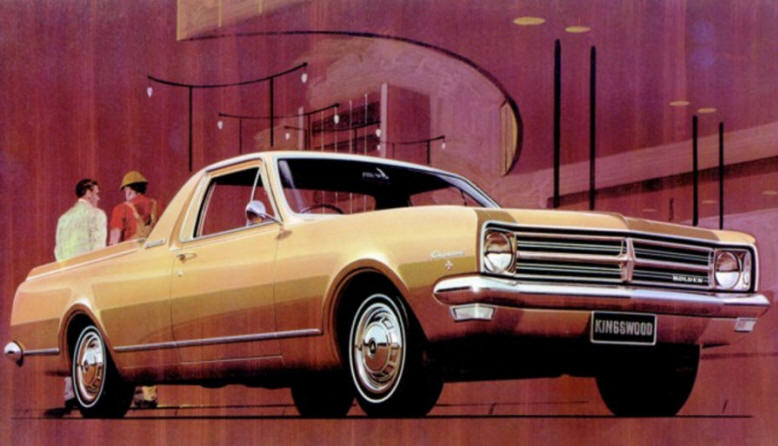 A proper, big, tough, no bull kind of a car.

Rarely has a car maker enjoyed such total market domination as Holden did in Australia. Having been a successful coachbuilder, production of its first Holden car, a 4-door sedan in began in 1948, by which time General Motors owned the company.

The mid-size, 6-cylinder, 4-door sedans which Holden made seemed to be just the ticket for Australian buyers – affordable, durable and supported by a vast dealership network. In a short time, Holden had well over half the market to itself, with a single model.

Typically, the cars which Holden had offered were not especially up-to-date designs, usually reflecting American design influences of a few years prior.

In the early 1960s, the first real threat to Holden's dominance arrived, in the form of the Ford Falcon. This was basically an American compact car built in Australia and priced against the Holden, but it showed up the outdated design that Holden had, and influenced Holden to look at much more modern deigns for its products.

A battle ensued in the marketplace with offerings from Ford, and to a lesser extent Chrysler (with its Valiant, again originally an American compact) steadily eating into Holden's share of the market. Holden responded with regular model changes, each offering improvements and being marketed aggressively.

By the mid 1960s The Big Three were preparing new models which would see the battle continue ever stronger. Holden was working on a completely new model, one which would prove very important to the company.

Launched in 1968, the new 'HK' series Holden was available in several versions. The base car was the Belmont, followed by the Kingswood, which would be the volume seller. Both these model names were new, and taken from American GM models. As with previous Holdens, the luxury version was the Premier. Sedan and station wagon versions of both were offered. 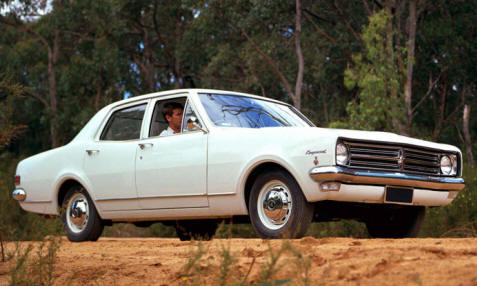 A little later more variants were introduced – Utility and Panel Van models for commercial use, an ultra luxury model the Brougham, with a lengthened boot, and finally the sweepingly styled 2-door coupe, the Monaro.

The Kingswood became an icon of Australian motoring. The name joined the lexicon of Australianisms - after the previous models, unimaginatively named Special...With a strong 6-cylinder engine of 2.2-litre or 2.6-litre (161 or 186), 3-speed column shift (“Three on the Tree” in the Aussie vernacular) and drum brakes all round, there was absolutely nothing technically advanced about the Kingswood. Synchromesh on first gear was an option.

For the first time in a Holden, a V8 engine was offered, an imported 307 cu in (5-litre) Chevrolet unit. Two-speed Powerglide automatic transmission was available, and was standard with the V8 engine.

The layout of independent coils at the front and semi elliptical leaf springs at the back was typical large Holden.

Inside there were vinyl bench seats front and rear, rubber floormats and options included a heater and radio. Holden had responded to safety issues becoming important in the motoring world and incorporated a collapsible steering column, recessed handles and knobs and many padded areas inside the cabin.

The styling was pleasant and modern - longer, lower and wider in the idiom of the day. The buying public took to the car in droves. Just over 199,000 of the HK model Holdens were sold through 1968 and 1969, comfortably outnumbering both the Falcon and Valiant sales combined.

The Kingswood was the car a real Aussie bloke would drive. A proper, big, tough, no bull kind of a car. You could 'hang the tail out' on a dirt road, and if you had the wagon, you could also chuck your kids in the boot. And your mate's kids. Of course, he'd only had Holdens before - like his father before him. Of course, he would never consider buying a Ford. His Kingswood was a much better car than the model he'd had before, and that was what mattered. And was the only method of judgement...

Along with other Australian manufacturers of the era, updates or facelifts were a regular expectation, so the HK begat the HT in late 1969. Outwardly the changes included minor items such as the grille, tail lights and colour schemes. 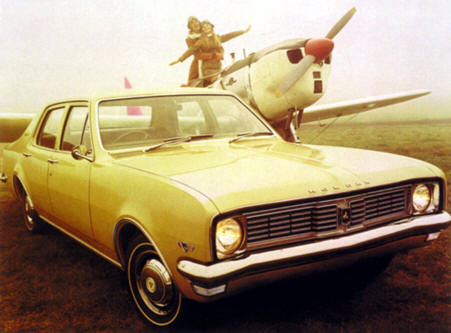 Big news with the HT was an Australian-built V8 engine, a 4.2-litre, 253cu in unit which produced 185bhp at 4400rpm. The most popular engine remained the 186 6-cylinder unit, which gained a new camshaft and now gave 130bhp, four more than before. The all-synchro transmission became standard with the 6-cylinder engines.

Suspension was tweaked and the cars sat on slightly wider tracks, easing the hungry wheelarch look which the predecessors had suffered from.

In June 1970 the revised HG version was launched, again recognizable by an updated grille, tail lights and trim. Holden was proud of the very wide array of options offered.

Welcome in the powerplant department was the 240bhp 5-litre (308cu in) V8 engine, first seen very late in the HG, now available across the board. Better news was that the old 2-speed automatic transmission was replaced with the Tri-Matic 3-speed unit.

It took a close look to see the differences. The HG version saw the least changes during the model life, the model was really to keep interest strong while the company readied its big new model.

1971 saw the launch of what was probably the most important new Holden since the original 48/215 in 1948. Holden certainly claimed it was. Competition between Ford, Chrysler and Holden was at its fiercest and Holden management knew that something special would be needed to maintain market leadership. 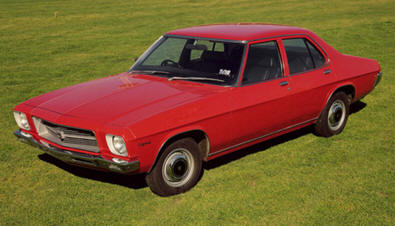 The HQ was launched to a huge welcome, as the first truly up-to-date Holden. The advertising campaign catchphrase was “The Great Way to Move”. Virtually the whole car was new. New inside and out, it rode on coil spring suspension all round, the engines and running gear were significantly upgraded and the entire package spelt out modernity.

The smooth styling was very much a part of the worldwide GM family of the era, with similarity to some models of Vauxhall and Pontiac in particular. Again a sedan, station wagon, 2-door Monaro and light commercial versions were made. A new luxury version, the Statesman was also introduced, replacing the unloved, poor-selling Brougham.

The HQ remained in production for three years, far longer than any model had in recent years. It was a runaway success, with almost half a million examples being made in that time.

But it wasn't all easy going, because in the same year that the HQ was launched, Chrysler introduced their first Australian designed Valiant, and a year later an all-new Ford Falcon came on the market. These too were also vastly improved over previous models. While many Australians had traditionally been very loyal to their brands, it was Holden that had the most to lose, having had the lion's share of the market to begin with.

So again, the updates began, with all three makers announcing newly improved versions at about the same time in 1974. Holden's update was the HJ, which included a rather heavy-handed facelift of the outgoing model which had been such a favourite. Specifications were upgraded but the big changes Ford had made, along with very strong motor racing success at the time, took their toll on Holden's position. 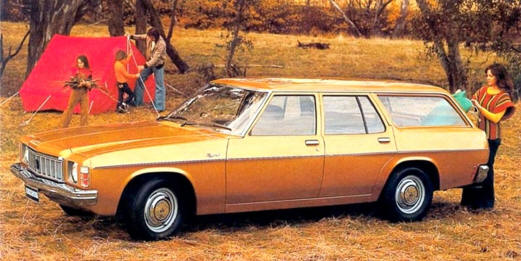 Again, in 1976 the Kingswood and its less numerous versions were updated, the HX being a very a minor cosmetic makeover, but including engine changes to meet Australia's first anti-pollution regulations. Most Aussies couldn't tell an HJ from and HX without checking the grille.

A final update of the big Holdens, the 1977 HZ saw few real changes. The 2-door body was dropped. New sporty Sandman versions of the Utility and Panel Van attracted the youth market, but it was not enough. Again, the visual differences compared with the previous version were very minor. Technically there were some changes, including Radial Tuned Suspension, heralding the use of radial tyres.

General Motors Holden's responded to perceived market requirements for smaller, more economical cars and replaced the HZ with the Commodore, based on GMs European Opel. The world had changed, and the market had changed. Time was up for what had become a bit of a dinosaur. After twelve years, the Kingswood was dead.

Looking back today, the HQ is the most loved of the Kingswoods - there remains a popular race category nation-wide specifically for HQs, and the svelte 2-door Monaro version still looks a very stylish machine so many years later.

There are ever dwindling numbers of most versions on the road in Australia. Many remained in everyday use until about a decade ago as cheap, sturdy cars, ideal for first cars or for back-packers to tour the country. Poor examples of common models have very little financial value, but prices for well-kept, low mileage examples of desirable versions are increasing strongly. While these very much everyday cars were just a part of the scenery for so long, now there are examples being nurtured and restored by loving owners.

Looking back without rose-coloured glasses, aside from the HQ, there was no Kingswood that was advanced or in any way remarkable. There were all kinds of reliability issues along the way - as with any car, but Kingswood owners ignored that. However they had, and still have, a hugely loyal following. For all the thousands of people who insist on telling you "They were a great car", had only an older Holden to compare it to...

Like no other car, the Holden Kingswood exemplifies Australian motoring in the late sixties right through to the early 1980s. Today as a retro car, a Kingswood adds character to the landscape more than they did when they were so common. 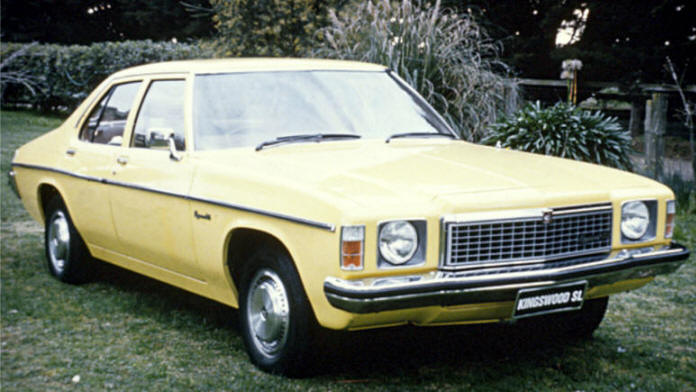 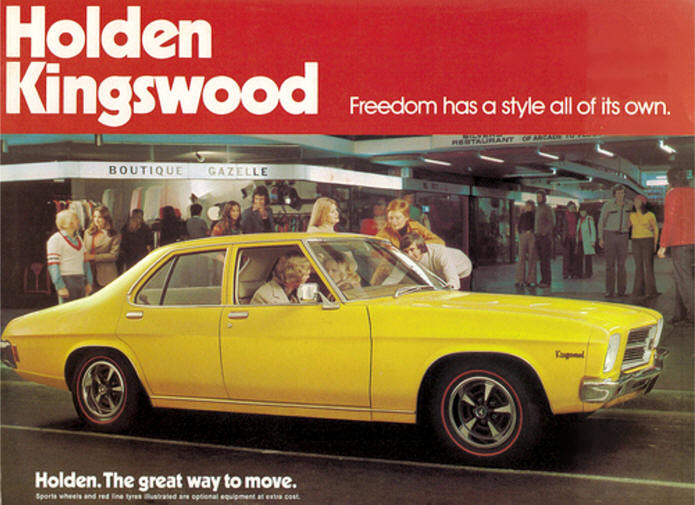 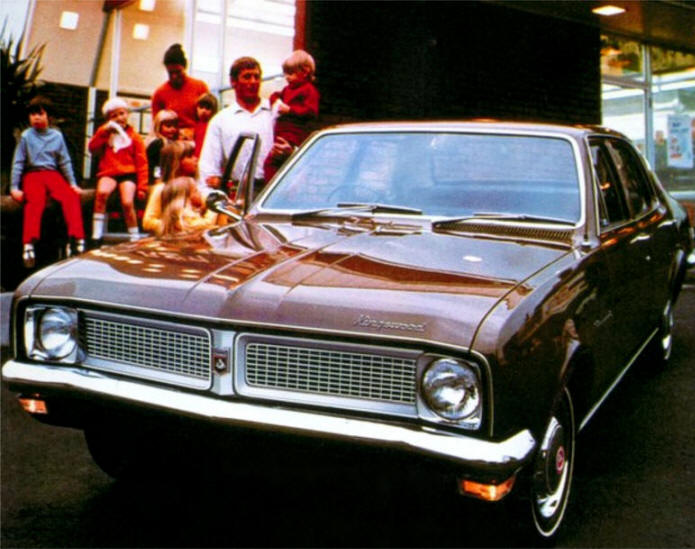 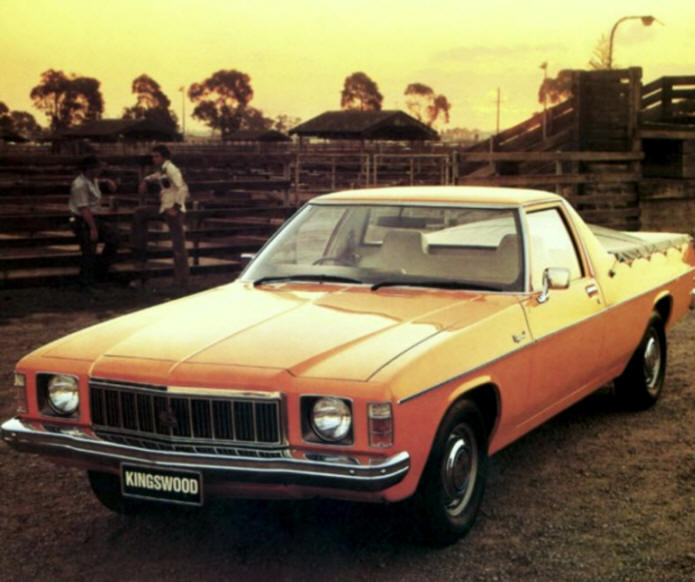