They're probably the greatest bargain exotic you can buy today. For just a few thousand dollars anyone can be the owner of an example of one of the most wonderful names in automotive history – Maserati.

But there's very good reason that the Biturbos are so cheap. In a word - fear. These are not the best built or most reliable cars. Parts are not cheap or readily available. And you can be sure that you'll need some...

The Biturbo though, is probably a much maligned car. They came from an era when Italian automotive industrialist Alessandro De Tomaso had expanded his empire. His stable had included De Tomaso, Maserati and Innocenti cars, Lambretta, Moto Guzzi and Benelli 2-wheelers and coachbuilders Ghia and Vignale.

Maserati had teetered on the brink of survival, as exotic car makers often do, for many years. In 1969 the French maker Citroen purchased a controlling interest in the firm. Results of the co-operation included the V6 Maserati Merak, which was the firm's first 'budget' supercar. It was a success, with over 1100 produced (between 1972 and 1983), making it the third best selling Maserati ever. As with the Merak, Citroen and Maserati component sharing was also enjoyed by the Bora, Khamsin and Citroen's SM.

However, by 1975 Citroen was bleeding, in part from Maserati, and it sold the company to De Tomaso. His first move was to add to the model range by fitting Maserati's big V8 engine into a slightly restyled De Tomaso Longchamp coupe and making the Maserati Kylami. It sold in small numbers, but was a simple way to increase the range. There were bigger things to come…

Investing heavily in the company, De Tomaso set a new direction, and the Biturbo was the result. Launched in December 14 1981 (the company was founded exactly 67 years prior to the day), the new model aimed further down-market than Maserati had ever ventured before, with a conservatively styled 2-door body, then a 4-door and a little later, convertible model. Sales began in April 1982.

People likened the styling to a BMW 3-series, which sells the car short. The neat, discrete styling worked well, particularly in an attractive colour (though they had some pretty ordinary colours on offer…). Badgework spelt out MASERATI all over the car, leaving no doubt that it was something special.

Over the years of production various subtle upgrades were made to the styling of all versions, the bumpers, grilles, headlights and wheels featuring in these changes.

While the styling was not particularly exciting, the car's two greatest assets were the luxurious interior and high performance.

Inside a Biturbo was like few other cars. Over the top luxuriousness, plush seats with extravagantly trimmed leather (or plush but ugly fabric), polished woodwork on the dash, console and doors – with the Maserati name inlaid on the dashboard – plus Alcantara (like suede) and plush carpet spelt out luxury, big time.

One of the highlights, which Maserati retained as a feature for many years since, was the 'feature' clock centrally mounted on the dashboard. It's something which has been widely copied by other makers since.

If you can stand the excessive interior styling it's a very comfortable place to be.

Driving the Biturbo
The driving position is good, the steering wheel quite small for the era (and comfortable) and there's none of the traditional Italian Driving Position requirement. It bodes well for a good drive. Available as a manual or automatic, each version has quite different driving characteristics.

I've driven both extensively - and each body type, covering thousands of kilometres in assorted Biturbos, when new and old.

The manual (5-speed ZF) Biturbo had a real on-off feel to the performance. I found the driving characteristics with the most common 186kW (250bhp) twin-turbo, 2.8-litre V6 engine suits the automatic transmission far better. It's on-boost more often and accessibly, making it the more fun version to drive.

The earliest version, identifiable by its wheel design.

American magazine Road & Track had this to say in 1986 “[We] found the automatic does lag behind the 5-speed up to about 30mph, but by 60 it's within a tenth of a second, and from there on up the automatic moves smartly past the manual, establishing a lead of nearly a full second by 80mph… With the automatic, however, much of the peaky power characteristic of the blown 2.5-liter engine is masked, the torque converter's slippage also allowing quicker turbo response.”

Initially the Biturbos had a carburettor 2.5-litre engine, though a 2-litre version was marketed in Italy as well (to meet road tax regulations in that country). Fuel injection came in 1987. The 2.8 engine came in 1986. American market models had slightly less power.

On-road handling characteristics are fine for the era, which means outdated toady. The Biturbo was more aligned to luxury than track days, but straightforward suspension upgrades can make a big difference (and some suspension parts are interchangeable with BMW).

A confusing myriad of variations of Biturbo models were offered, some specific to certain markets.

The 2-door and 4-door sedans (originally 225 and 425 in Maserati-speak) are the least exciting to look at, but provide an unusual level of practicality for an exotic make. The Spyder, on a 120mm shorter wheelbase, with the conversion performed by Zagato, has quite a different character.

What to look for
The Spyder suffers from scuttle shake (where the dashboard and windscreen shudder) over rougher surfaces. The roof even had fitting and sealing issues on brand new cars, so quite probably on any car now these issues persist.

Other issues include electrical gremlins (also present when the cars were new), and poor quality trim. The interiors do not stand up to wear and tear especially well and many are a bit shabby now.

Rust isn't especially an issue in Australia's dry climate – certainly the Biturbos are not as bad as some other Italian cars of the era. Which isn't to say they don't rust…

For the first part of their lives, most Biturbos were well looked after, garaged and frequently serviced. All good. However, their values plummeted, bringing many of them rather quickly into the hands of people who couldn't really afford to maintain them. So a lot of Biturbos have suffered from neglect more than poor build quality. 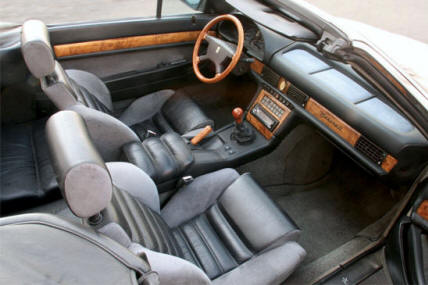 As I mentioned earlier, cost and availability of parts can be an issue, and knowledgeable specialist mechanics on the model are few and far between.

I've seen a 4-door car in rough shape advertised for over a year, with no interest at any price. And at the other extreme I've seen Spyders for which the owners want dream money because it's a Maserati.

There are good examples of all models of Biturbo out there, but be prepared to pay the higher end of the price range for a well looked after car. However if you're handy with a spanner and a volt-meter, a cheaper Biturbo offers unbeatable value.

Ultimately 37,966 Biturbos were produced over 17 years under an amazing 46 different model names… The Biturbo spawned a whole raft of Maserati models – the Karif, 222, 228, Ghibli and Shamal among them, each beefier, faster and more exclusive. The Biturbo set the direction for Maserati, even leading to today's Fiat Group models. In spite of the Biturbo copping flack over the years, it was a huge success for the company - 6000 being sold in 1986 alone. The 425i was a model unique to Australia (other countries just getting the 425). Among the 3793 buyers of the Spyder version were 4-time F1 World Champion Alain Prost and Sir Elton John.

What else could you buy for Biturbo sort of money which has some of the attributes of the Maserati?

Alfa Romeo Spider – the modern front wheel drive model. It's cheaper than a Biturbo Spider, more modern. Less performance. Quite dramatic styling. V6 goes well. If your prefer a Latin car but can't quite convince yourself to go the Maserati way…

Porsche 944 Turbo – Slightly better performance than the Biturbo and certainly more sporty handling characteristics. A bit pricier than the Biturbo. Parts supply good, but not cheap. Got a good name too…


Jaguar XJS – Legendary bad build quality. Potentially even more trouble than a Biturbo. Prices vary but all are pretty cheap today except show cars. Luxurious and comfortable, but a bit of a barge to drive. V12 especially thirsty too.


Lancia Delta Integrale – Very exciting performers, especially the later versions. 4WD, turbo. Interiors deteriorate quickly. All made LHD, but not impossible to convert to RHD – some have been done already. Now a lot more money that a Biturbo.


BMW M3 E30 – The original M3. A gem of a car in all respects. Great performance from 4-cylinder non-turbo motor. Only made Left hand drive, but easily converted. Recent value increases make them vastly more costly than a Biturbo. This is really the best driver's car out of this group (but the most expensive), closely followed by the Lancia.

Above: Factory photo of a 425 - the 4-door is the rarest version of the Biturbo. 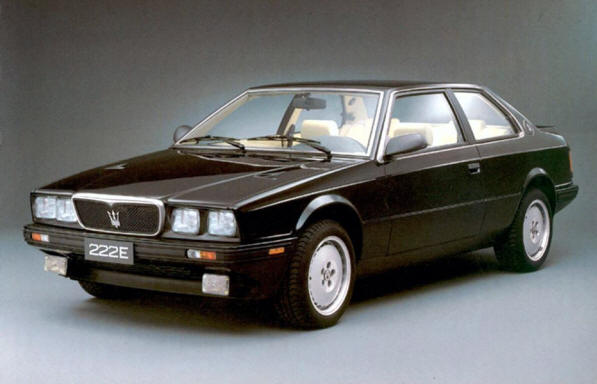 Above: The 222E version was not sold in all countries. 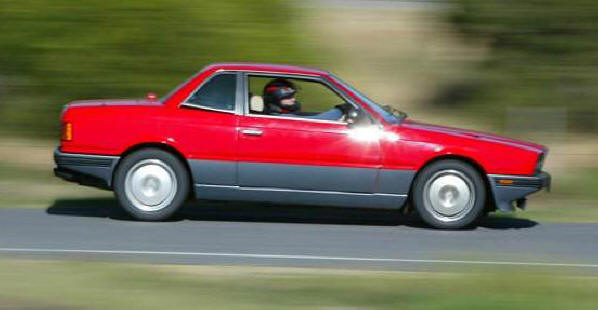 Above: The Karif was based on the Spider's short wheelbase. 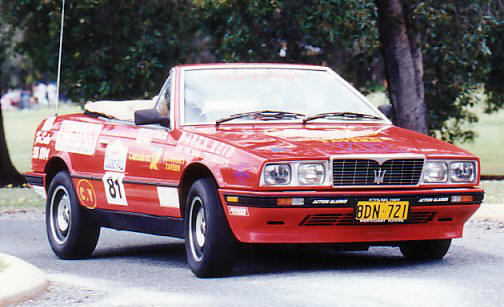 Above:  An early Spyder competing in the AEM Classic Rally 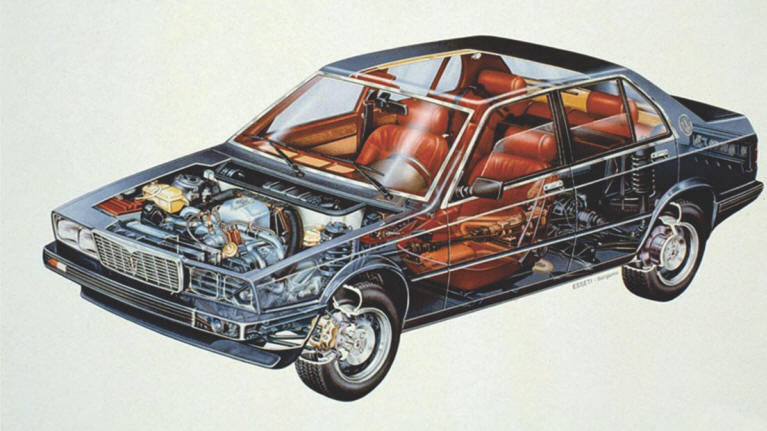