Make no mistake: This is a world-changing car.

I’ve never been quite convinced that electric cars are the future. An everyday car piled full of batteries does not make a convincing argument. For all the pressure the Greenies and Governments put on car makers, for the most part electric cars have really only just started advancing - they did make them 100 years ago but gave up... They can either go fast for a brief time or slowly for a longer time. They’re too heavy and need slow recharges - provided you're near a working charging station. Battery life deteriorates, ranges make people nervous and normal petrol cars converted to electric innards are an inefficient compromise.

Hybrids may be a short-term solution to the fossil fuel problem. And in many cases, like in Australia, electric cars are not zero emission – they just move the emissions and fuel usage from the car to the power station. Australians buy big cars in case they need to move the whole family. We buy huge four wheel drives in case we have to visit the centre of Australia. We’re simply not going to buy cars which have a 300km range and where a small electric car costs more than a V8 Landcrusier.

Electric cars should be used by government utilities where they only need to do a limited distance each day and can be plugged in at night when their drivers have gone home. Or private buyers who want to have a small car as a city runabout… And the price needs to be reasonable. The price of a Mitsubishi MiEV is ludicrous, no matter how good the car is. Sales of any electric cars to private buyers in Australia have been negligible. And none of them offer any kind of value for money. 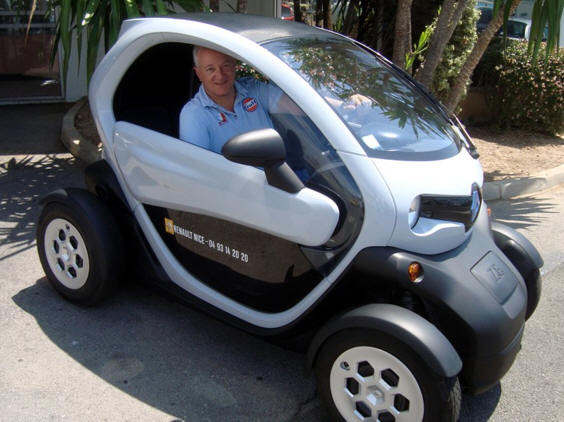 Well Renault seems to have cracked it. They’re launching a whole range of electric cars and the most convincing of the lot is the little Twizy. What an incredibly well thought-out design. At last – an electric car that makes sense!

This is the sort of unusual design and uber-clever thinking that you typically only see in products made by tiny companies where the owner is on drugs – the banks aren’t interested and after the launch you never hear of them again. But to see one of the major players come up with such an exceptional car, so different to anything anyone else makes is totally commendable.

So what is the Twizy? It’s the next step up from a scooter. It isn’t meant to be all things to all people. It’s not a mum’s wagon, it’s not an executive express and it's not supposed to cross the Kalahari Desert. It is strictly a city car, strictly a 2-seater - and completely funky.

The Twizy boasts proper engineering and real-car construction quality. A strong steel-tube skeleton with plastic panels, which provides a much higher level of occupant safety than a scooter, the Twizy operates like a car, not a scooter. There is a steering wheel (with airbag), seatbelts, four wheels and a low centre of gravity. The two seats are tandem style, with a proper driving position up front and a decently supportive seat in a reasonable amount of space behind (two full-size adults can fit). If you opt for the all glass roof, the rear passenger has no need to fear claustrophobia.

The door are optional too. They have no side windows and the lower section is transparent, also helping alleviate any claustrophobic feelings. The lightweight doors swing up from the front (yeah, like a Lamborghini) so if you’re in a narrow space there’s no problems getting in or out. No side windows means no fogging and demisting issues. Keeping the Twizy’s weight low was one of the design targets.

Two electric power units are available. The base car fits into the European ‘Sans Permit’ category with just 4kW, it can be driven by 16 year olds without a license, and old ladies who are too scared to try to get a license, like the myriad of other little plastic buzz-boxes you see around France, Italy and Spain. It’s capable of only 45km/h.

Starting at €6,990 and up to €8,490 for a loaded model they’re keenly priced. There’s a 3-year unlimited kilometre warranty. The batteries you lease for a few euros a month (depending on the distance you drive), which helps keep the cost down, but also Renault guarantees that if it won’t hold more than a 70% charge, they’ll replace the battery pack at no charge (sorry…).

Renault says it takes a usefully short 3½ hours to fully charge a Twizy, good for 100km of driving.

It’s just 1381mm wide, so can fit in spaces Smart owners wish they could get into. Inside, it’s surprisingly comfortable. The dashboard is very car-like, with a small electronic instrument panel ahead of the car-like steering wheel. The seat adjustment is fore and aft slide-only, but I did not find it hard to get a good driving position. The seat must be slid forward for an adult to get in the back – small kids can squeeze through without moving the seat.

The rear seat fits a full sized adult – I’m 6-feet tall and fitted well with another 6-footer sitting in the front. The back seat passenger sits knees-out and the view ahead isn’t good, but you’re close to the view at the sides – and as I mentioned earlier, a glass roof helps a lot.

The interior is fairly plasticky, by necessity – it has to be weather-proof. But it’s not all horrible plastics, and there are lots of colour and finish options to keep you away from too much grey. The same on the outside, where colour inserts on the doors, in the roof and for the main body offer some relief. There are two decently big gloveboxes and a good storage area under the rear seat, all lockable, but there’s no boot per se. Not even a back window…

There’s a broad range of options, including a choice of colours of alloy wheels, leg covers, interesting exterior graphics, a child’s seat and even painted dashboard sections. Car designers aim to have three ‘surprise and delight’ features in a new car – they may be clever storage areas, electronic gimmicks (like self parallel parking) or mood lighting. The whole Twizy is a surprise and delight feature itself. An exceptionally well-conceived design brought to reality without the usual diluting of a design, which cautious big car makers often suffer from.

It’s a clever design, aimed at a specific target market and is sensibly priced. It should become a world beater in the scheme of electric cars – which so far have been nowhere near as popular with private buyers as makers and governments around the world had hoped. In its first year, 2012 the Twizy was the biggest selling electric vehicle in Europe.

It’s different enough that other makers won’t copy it for a few years unless it’s a major success. I've ridden around the streets of Paris in a Twizy - it's natural habitat -  and it gave the feeling of being a part of Paris in a way that being cocooned in a normal car doesn't allow. The pitter patter of cobblestones replaced engine noise. A drive of an evaluation car in Australia illustrated to me how easy to use the Twizy is.

As for Australia, the Twizy will be too frighteningly different for the law-makers to allow to be marketed here. I suspect Renault Australia fears sales would be too small to make marketing the Twizy here worthwhile. Small car, small price, small profit margins. There's one which Renault imported as a curiosity. I've driven it briefly - and it's everything it should be.

It’s been a long time coming… an electric car from a major car manufacturer that isn’t a compromise, and that makes sense. The Twizy has converted me. But that's not to say I like normal cars filled up with batteries to make them electric... 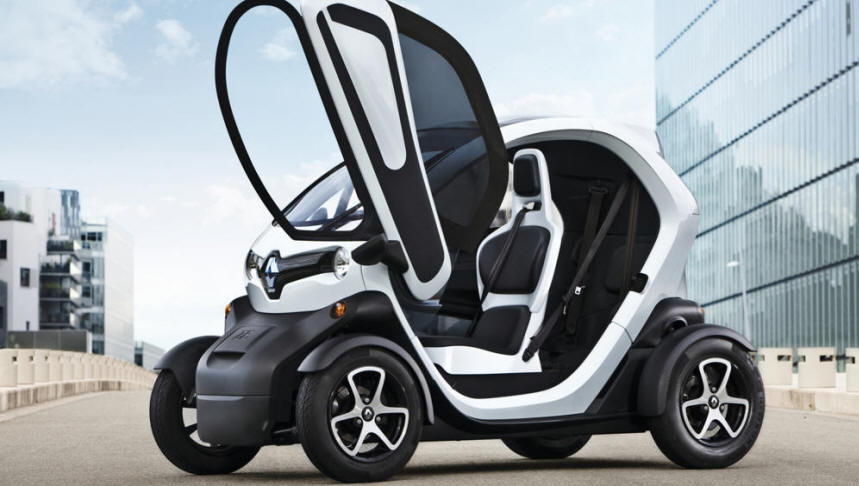 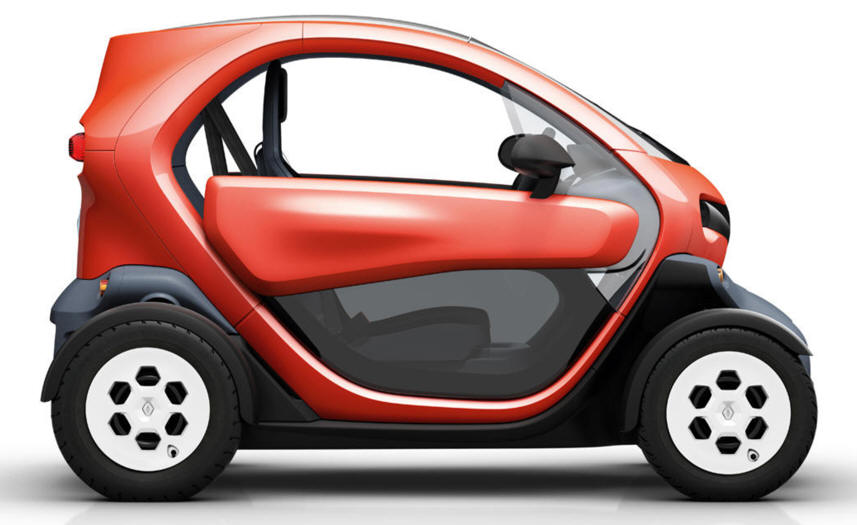 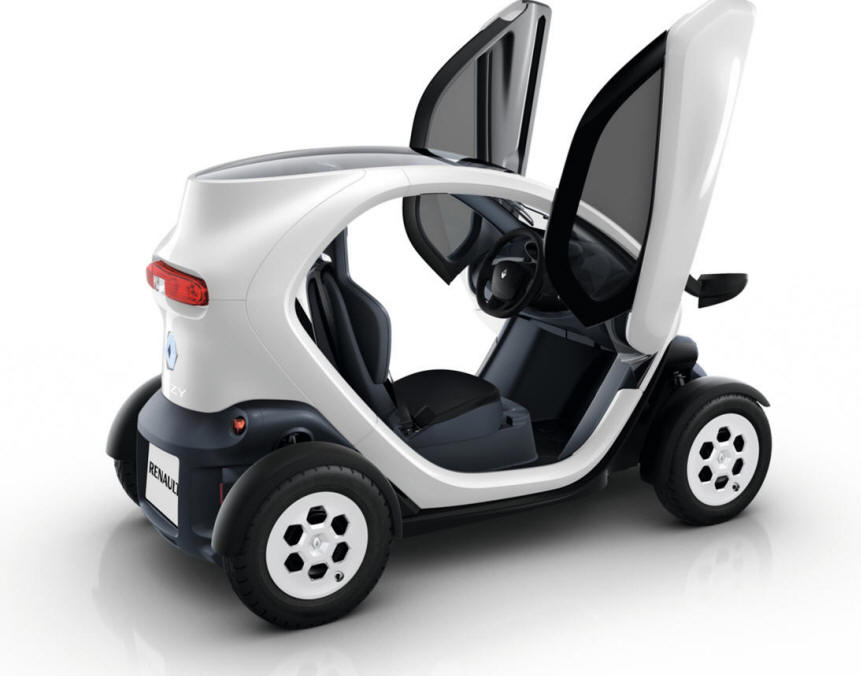 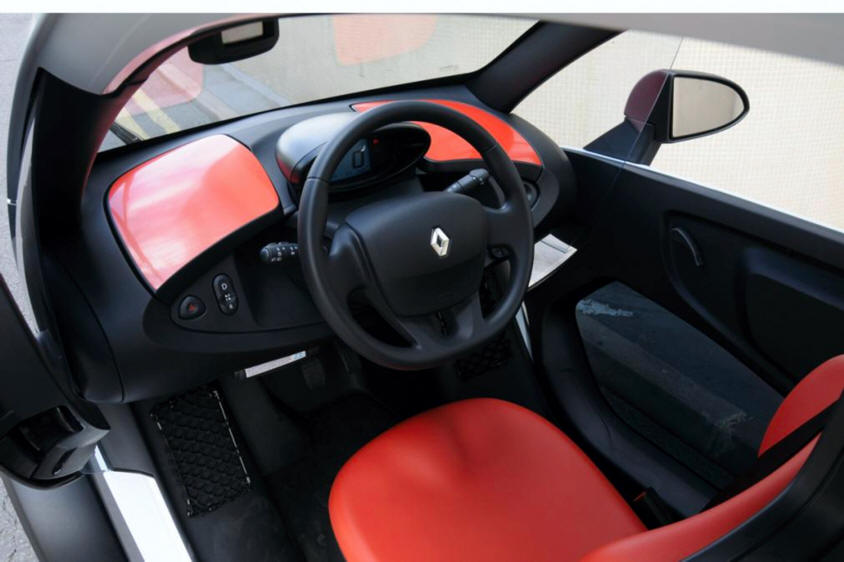